How I began with Digital
My first camera was the Olympus OM1, loaned by a friend when I was a university student. More than 30 years later, after a session of looking at old family prints and slides, my daughter asked why I no longer made pictures. Her question put me in touch with how much I missed photography, and with a barrier that was holding me back. I felt daunted by the prospect of learning how to use a digital camera and process the images. As she surely intended, my daughter’s question was the push I needed to give digital photography a try.

For my birthday that year, my family gave me a Canon PowerShot SX200 IS, a fancy point-and-shoot that could be used manually. I carried it 24/7, and made my social media debut on Aminus3, a wonderful, international photo-a-day community. The Aminus3 format inspired me to take pictures every day, and to seek inspiration and guidance from other photographers. I soon found myself wishing for a camera that could take better quality images.

Not wanting to give up the small size of the Powershot, I started researching the options, and learned about the new mirrorless cameras. In 2011, I bought a Lumix DMC-G3, but wasn’t happy with the LCD screen. In 2013, a friend showed me his Olympus OMD EM-5. I loved the retro look — so like the OM1 – but the deciding factor was the far superior touch screen and mode selection dial. Other huge pluses were the weather sealing and compatibility with my existing lenses. After my first session with the Oly, I was hooked, and even more so when I experimented with vintage lenses like the 55mm Asahi Takumar f/1.8.

But then, the unexpected happened. Only a few months later, I switched from working freelance in New Zealand to full-time employment based in Laos, and my daily photography routines fell apart. I had a much better camera, but wasn’t taking pictures.

A couple of years later I returned to NZ, intending to pick up the camera, but again, something was holding me back. I was out of practice and felt like a complete novice. Then in Sept 2017, I saw a double exhibition of photographs and paintings. The first part featured more than 50 works in different media by renowned and emerging artists, commissioned by the Department of Conservation. The second part celebrated New Zealand photography. The photographed images were especially magical, and l knew it was time to put aside excuses and make pictures again.

In 2018, I splurged on an Olympus OMD E-M1, and invested in my first digital prime lenses, the Olympus M.Zuiko 17mm f1.8 and the Panasonic/Leica 25mm f1.4 Summilux. I also began a year-long course offered by Photography Institute New Zealand. The most challenging assignments for me so far have been on still life and portraiture. Arranging people and things and using artificial lighting to photograph them forced me to leave my comfort zone way behind.

I began learning post-processing in 2011, using Aperture. After Apple nixed it in 2014, I began to look for an alternative, and eventually settled on Luminar. After waiting three years for the promised digital asset management system, I’m delighted that Luminar with Libraries has finally made its debut.

My Photography Streams
My photography has three main streams. I make pictures at home, often returning to favourite spots again and again to capture their changing moods. I live in Nelson, New Zealand at the top of the South Island, a region blessed with beautiful places. To the east, we have the Marlborough Sounds, ancient sunken river valleys now filled with the waters of the Pacific Ocean. Golden Bay lies to the north; a paradise of pristine beaches, rugged mountains, and scenic river valleys. To the west stretches a wildly beautiful coastline and the huge Kahurangi wilderness, New Zealand’s second largest National Park. 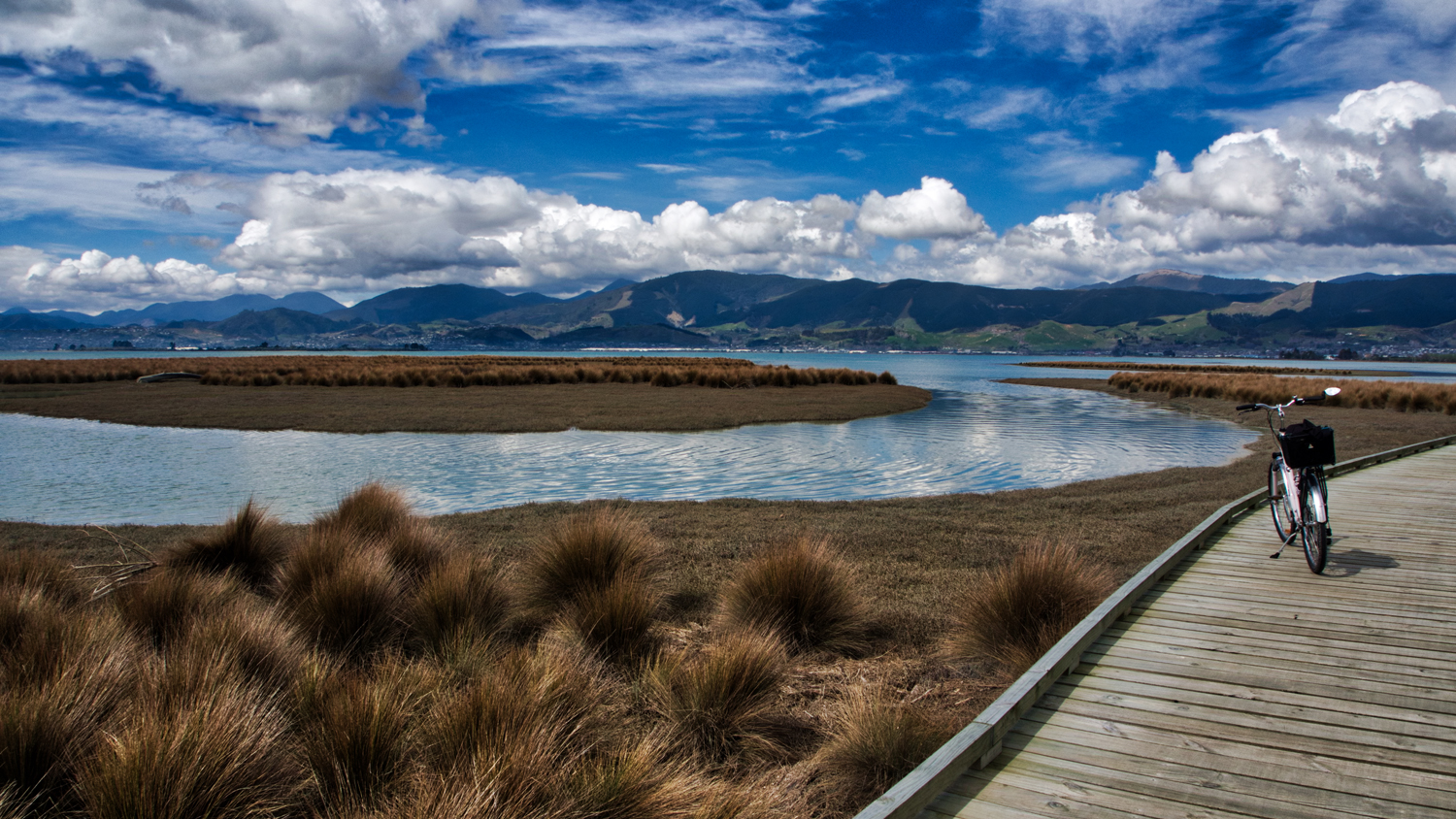 The South Island has 13 long distance bike trails. I live a couple of kilometres from the newest one, the Great Taste Trail. It wends through vineyards, villages, and along the coast and is very handy for riding to our local beach. 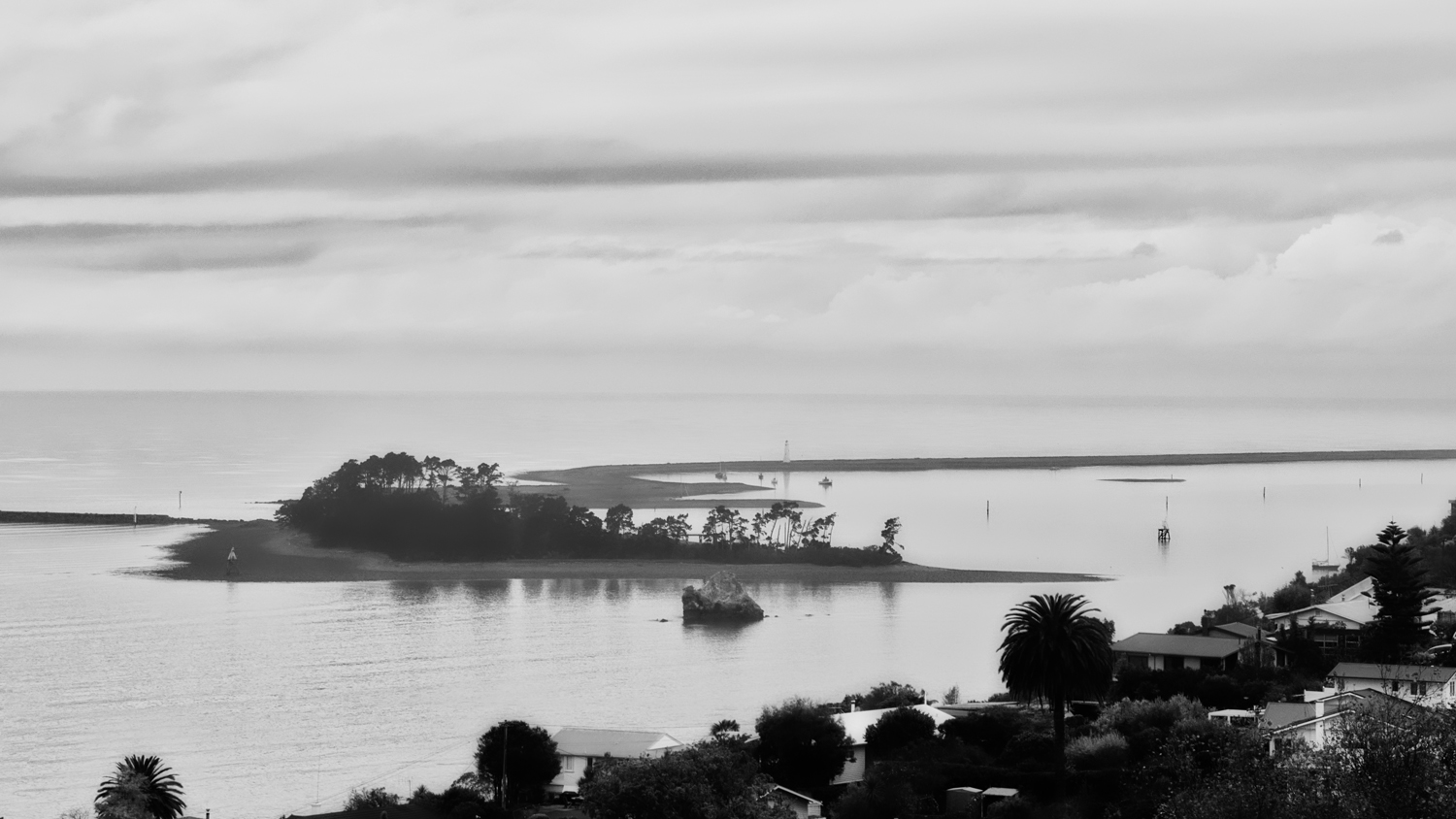 Nelson’s harbour, called the Haven, is protected by a natural boulder bank. When Nelson was first settled, ships sailed into the Haven through the narrow, treacherous channel between “the rock” and the boulder bank. The Fifeshire was wrecked on “the rock” in 1842, and has been called Fifeshire Rock ever since. 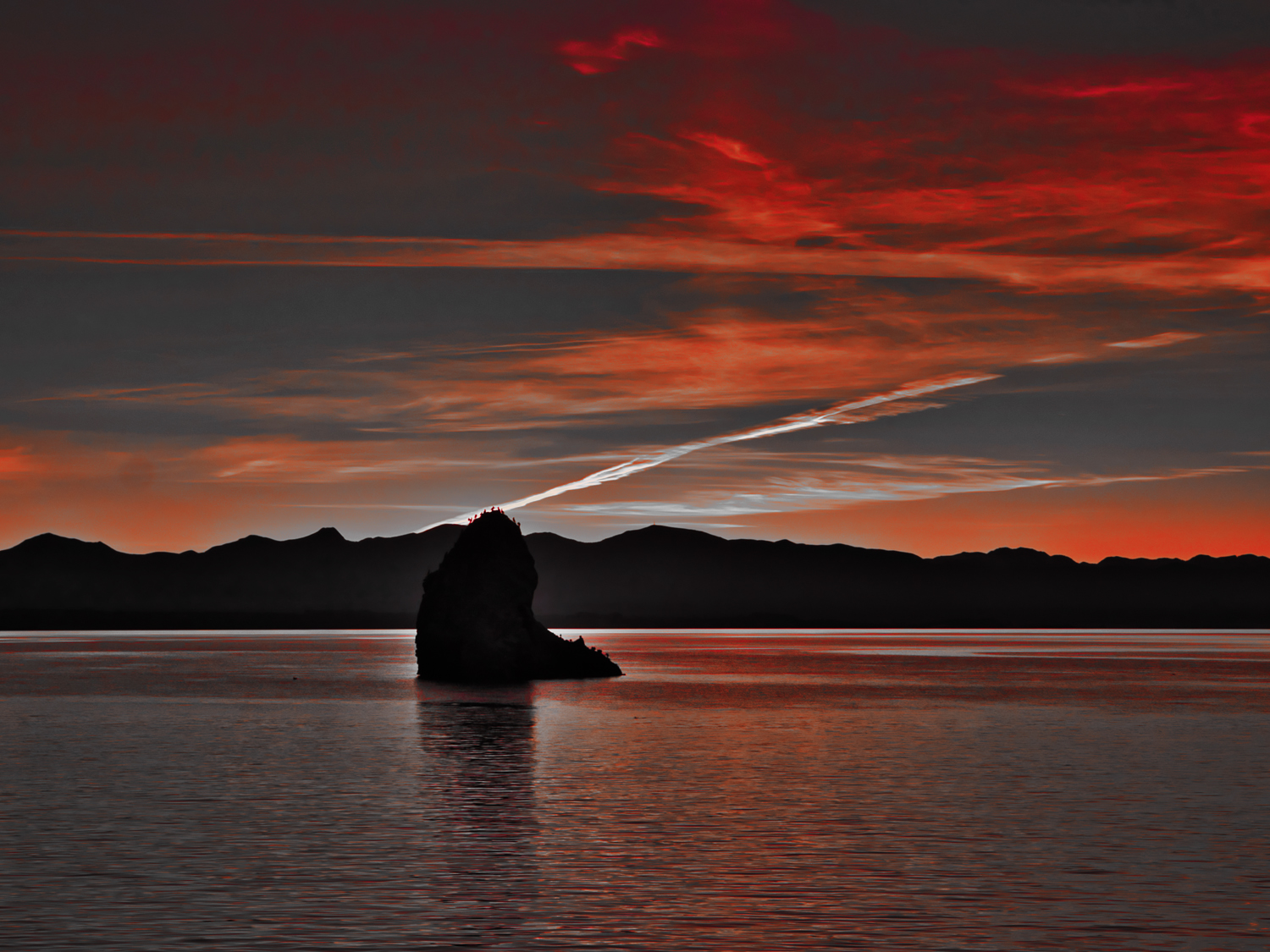 Fifeshire Rock has inspired artists and photographers since the Nelson settlement began. It can be viewed from Nelson’s Rocks Road, or from the Port Hills rising above the coastline. 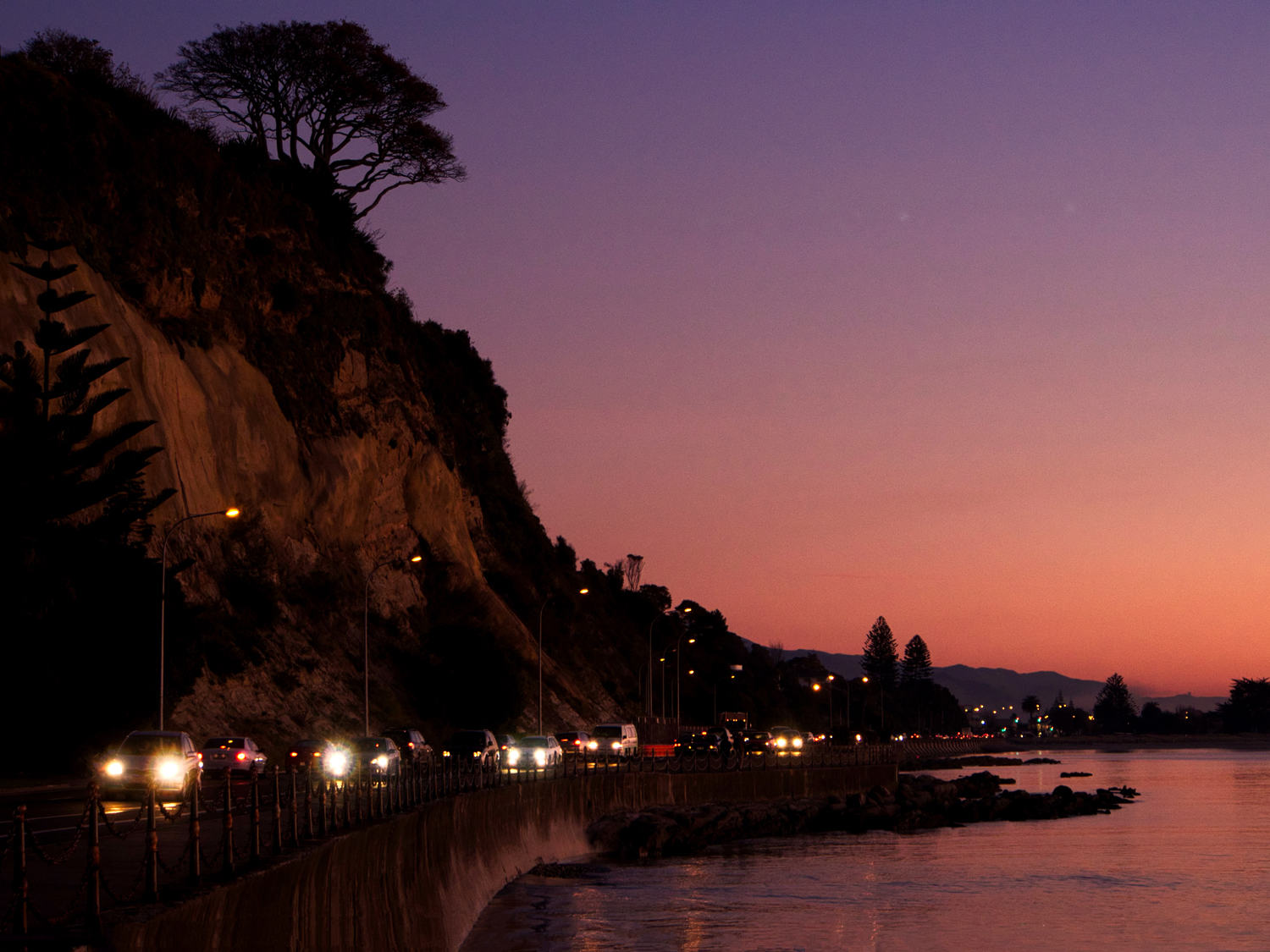 This is a view of Rocks Road at sunset. It’s one of only two routes into Nelson from the neighbouring towns of Stoke and Richmond, so traffic can be bumper to bumper in the morning and evening, but it’s hard to complain about spending five or ten minutes looking at the views. 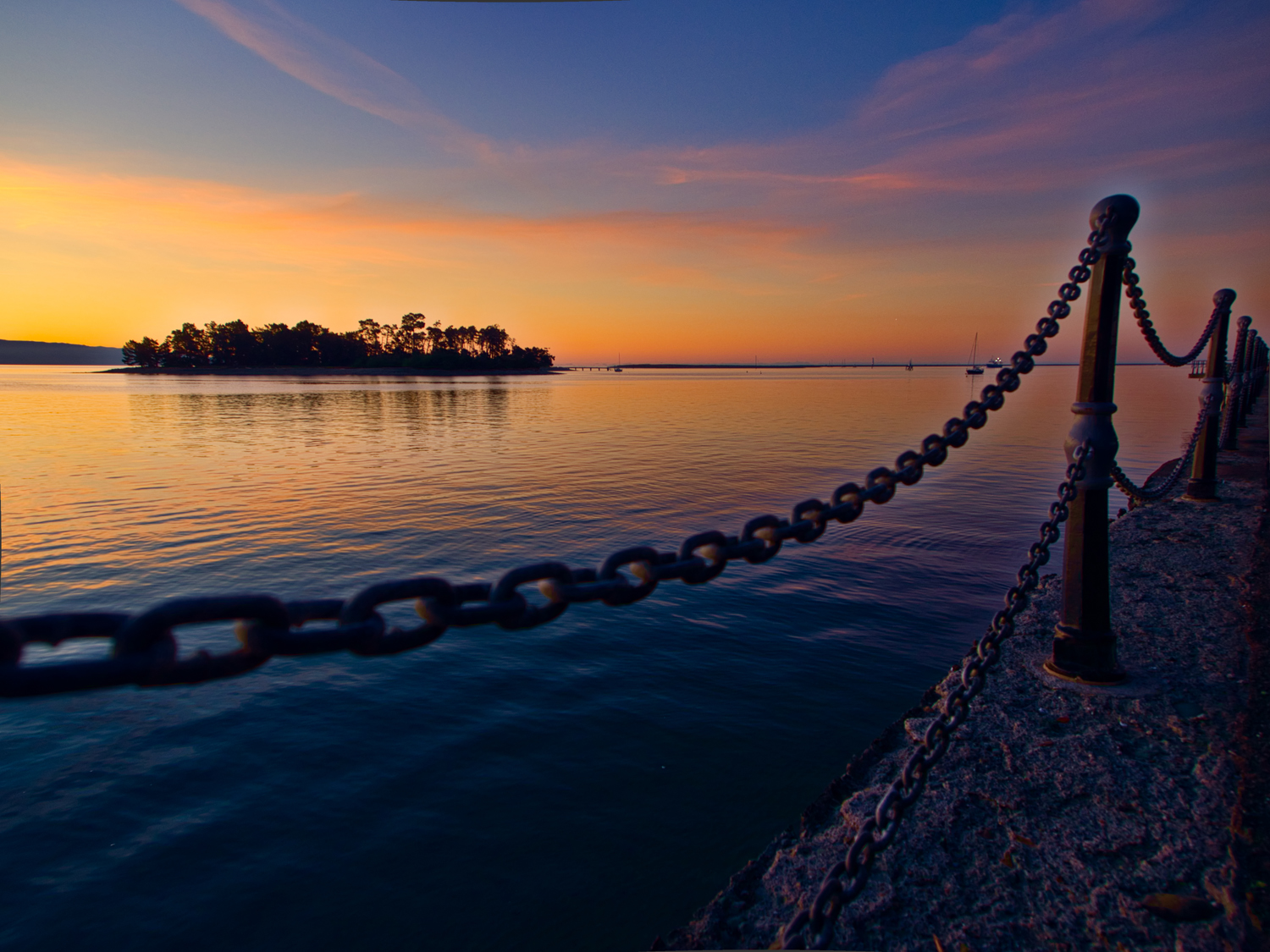 The attractive Victorian-style cast iron chain fence that runs along Rocks Road for almost 2 km was a gift to Nelson from one of its founding citizens. This view of Haulashore Island and the Nelson Haven from the edge of Rock’s Road gives an appreciation of the aesthetic quality of the fence, built between 1897 and 1899.

Repeated shipwrecks and strandings on Fifeshire Rock eventually led the Nelson City Council to dredge an entrance through the boulder bank in 1906 known as “The Cut.” The cut created Haulashore Island. 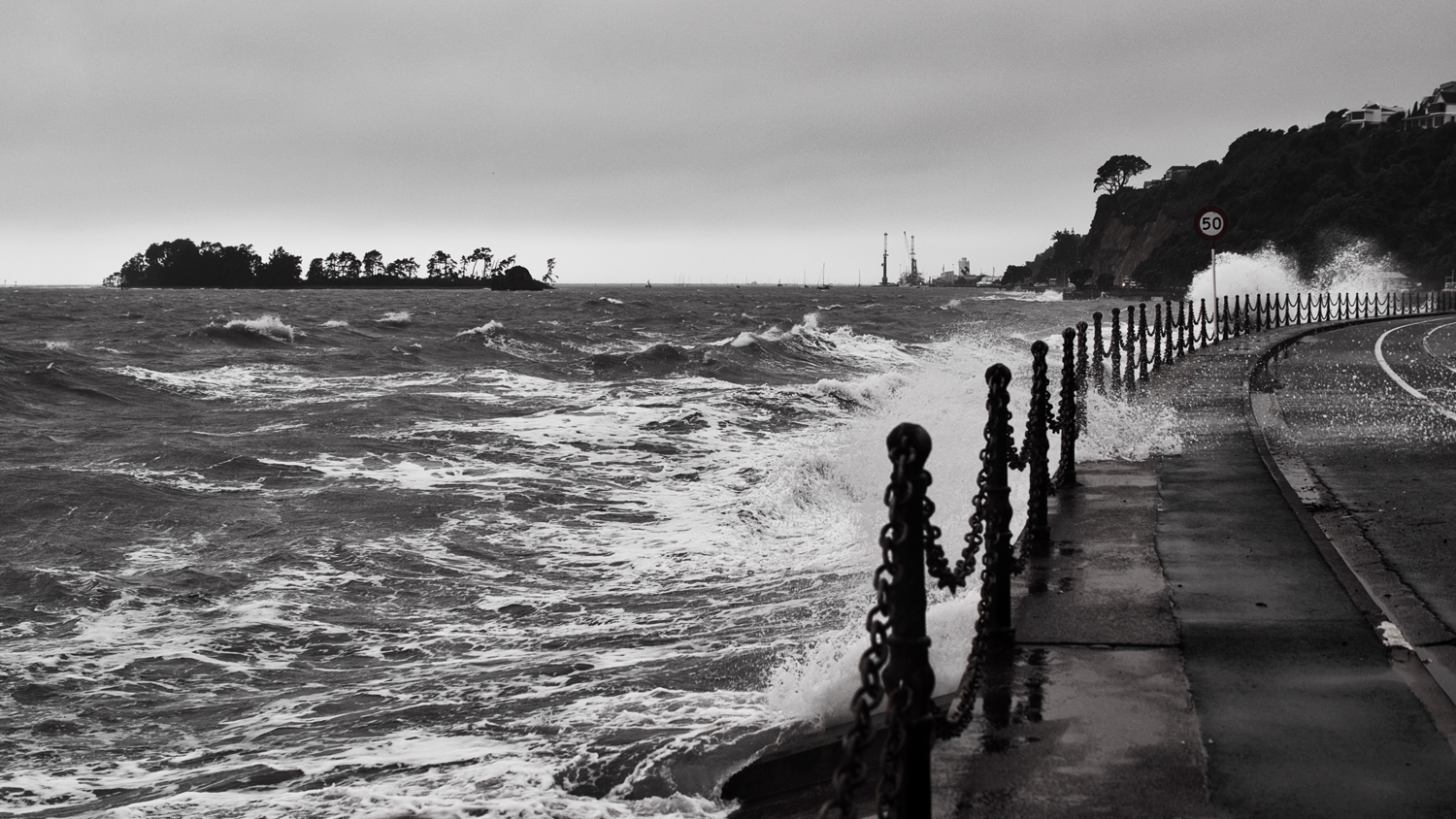 The laying of New Zealand’s first international telegraph cable from Nelson to Sydney gave the Cable Bay its name. The cabling took 11 days and transmission began on in 1876. Pepin Island divides the bay into two arms. This one, photographed at low tide, is called Delaware Bay. 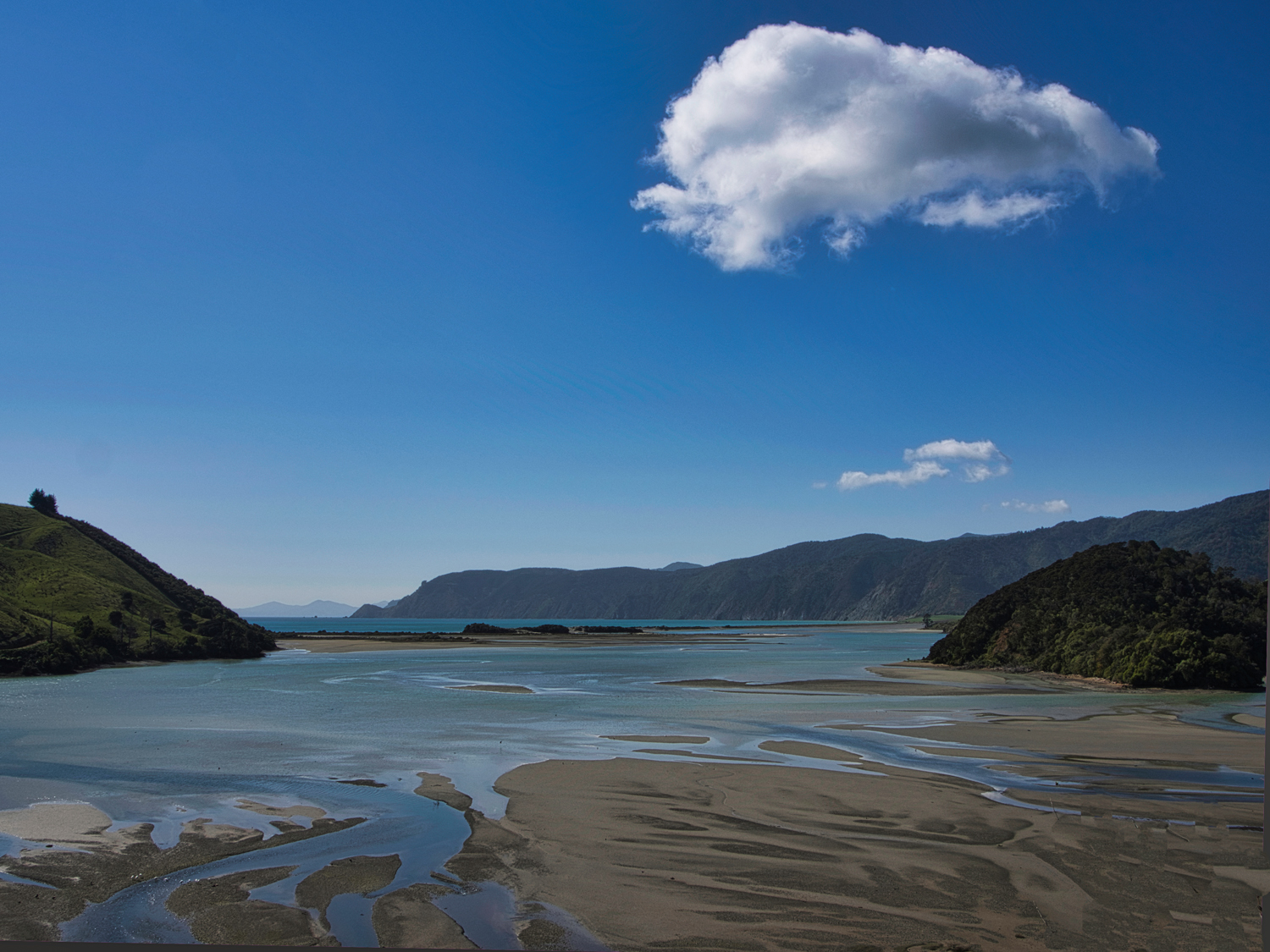 Golden Bay
Many people have seen an image of Golden Bay’s beautiful Wharariki Beach displayed as a Windows 10 background. My black and white image of dune walkers on another part of Wharariki has a surreal flavour. 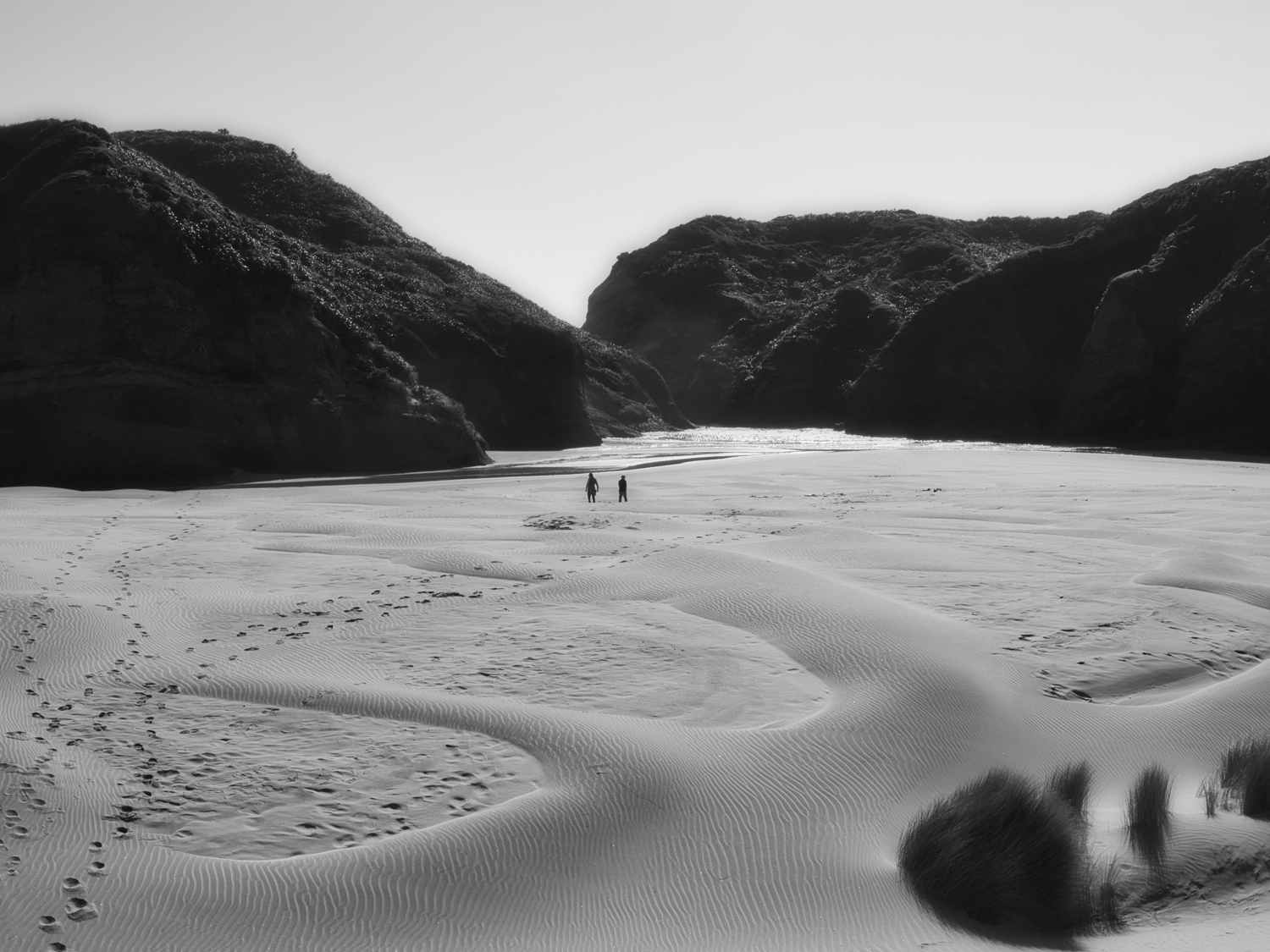 The dune walkers are volunteers with the Farewell Wharariki HealthPost Nature Trust. The Trust is working with New Zealand’s Department of Conservation to re-establish safe breeding areas for native bird and reptile species. These habitats have been disrupted by incursions of rats and other mammals introduced by successive waves of human colonists. The Trust aims to restore breeding areas for fairy prions, shearwaters, godwits, petrels, bitterns and penguins, and eventually to reintroduce rare and endangered species, such as the Pāteke (brown teal), the Little Spotted Kiwi and the Nelson Green Gecko.

The West Coast
The West Coast of New Zealand’s South Island is known for its high rainfall, and is magically transformed when the sun shines. 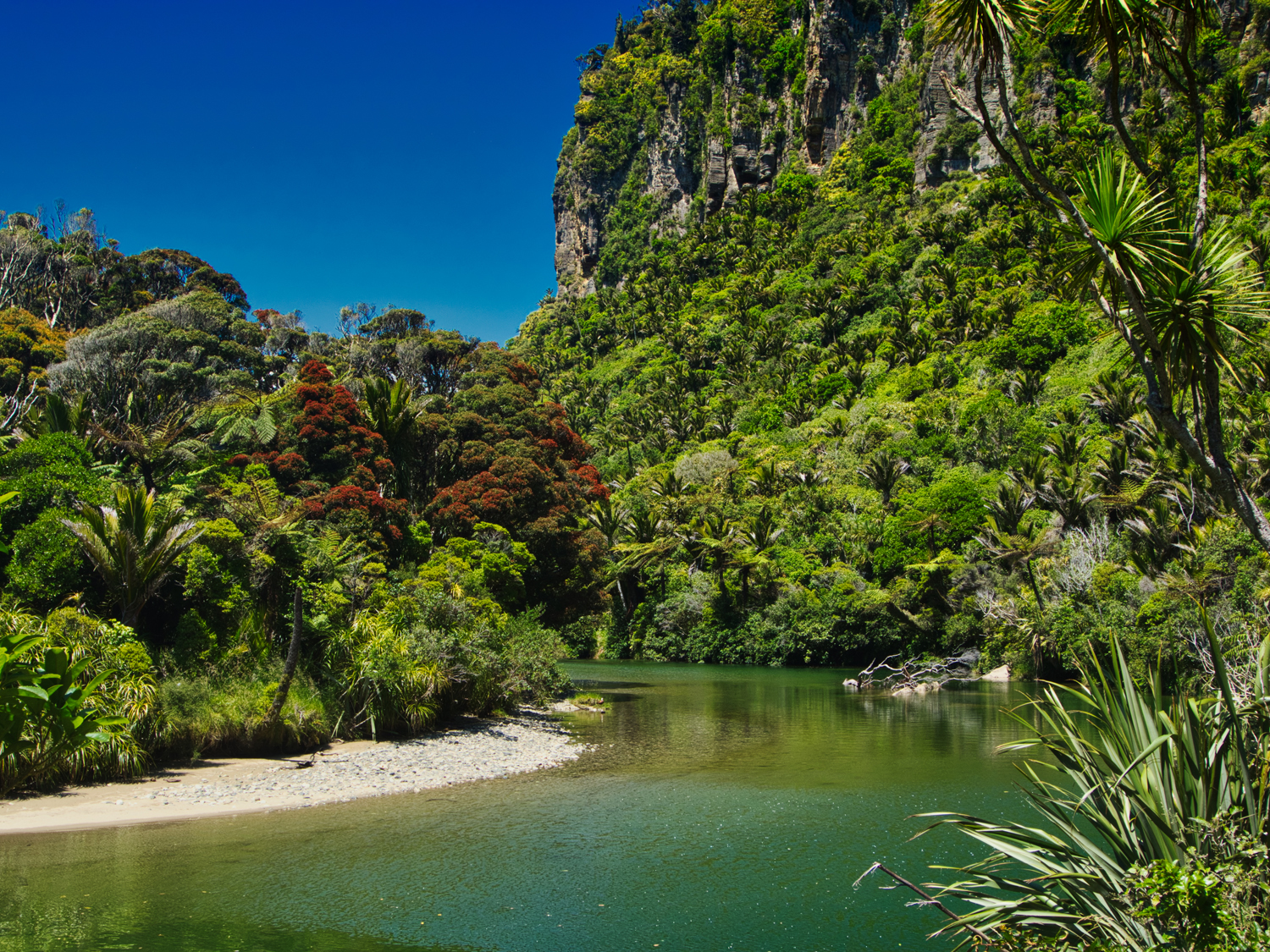 This is a bend in the Punakaiki River, photographed in December, our summer, with red rata vines in full bloom. Ratas are forest lianas endemic to New Zealand. In this image, you can also spot tree ferns, nikau palms, cabbage trees and flax, other plants typical of our native bush.

Further South
Whenever I can, I visit places further south. The snow-capped spine of the Southern Alps divides the South Island into a huge diversity of landscapes, including ten of New Zealand’s fourteen national parks. 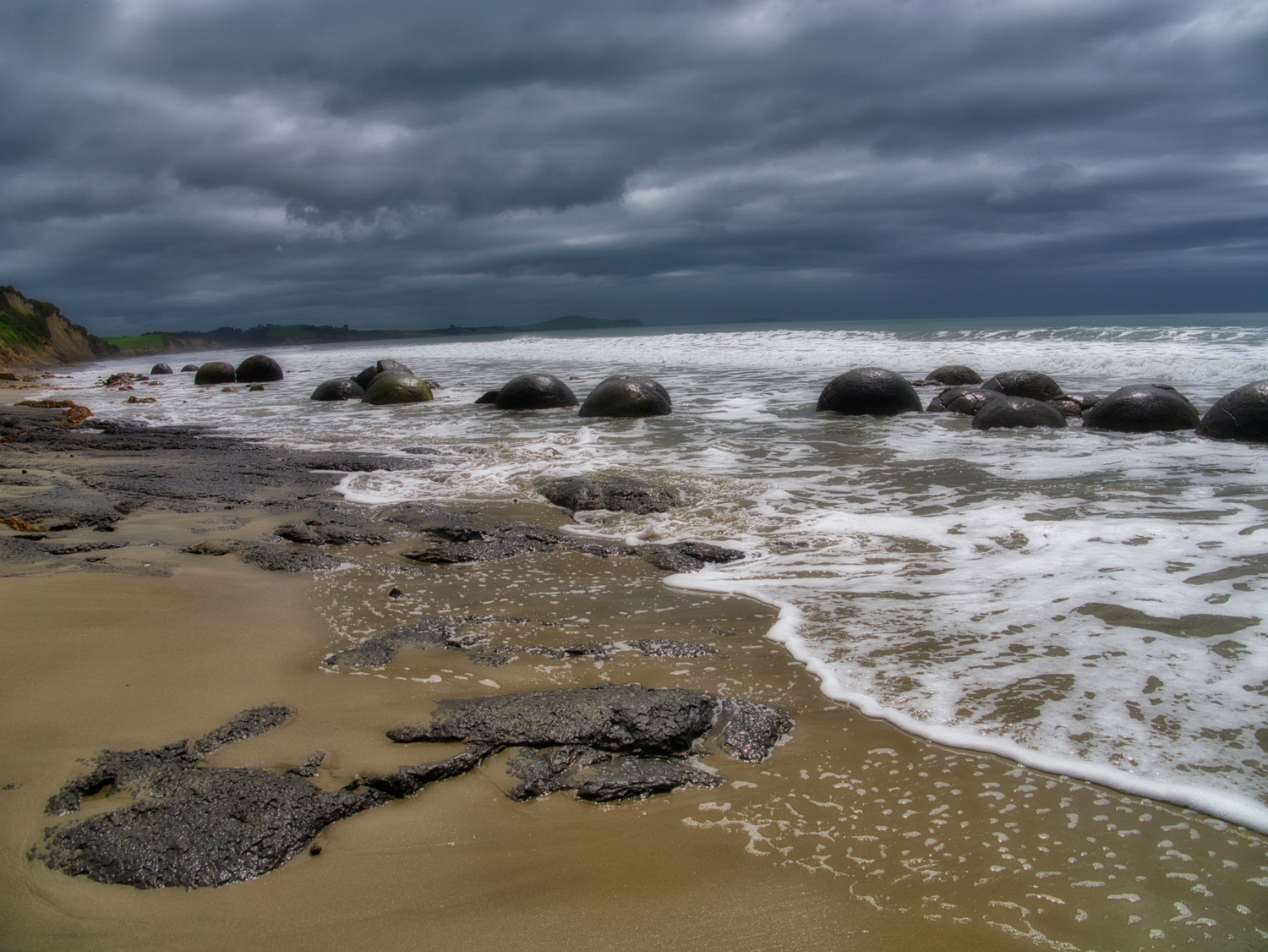 The Moeraki boulders are a group of large spherical “stones” on Koekohe Beach near Moeraki on the east coast the South Island. These boulders started forming in ancient sea floor sediments around 60 million years ago, and were exposed through the shoreline erosion of the coastal cliffs. I barely managed to photograph the Moerakis in the moments before a huge huge storm 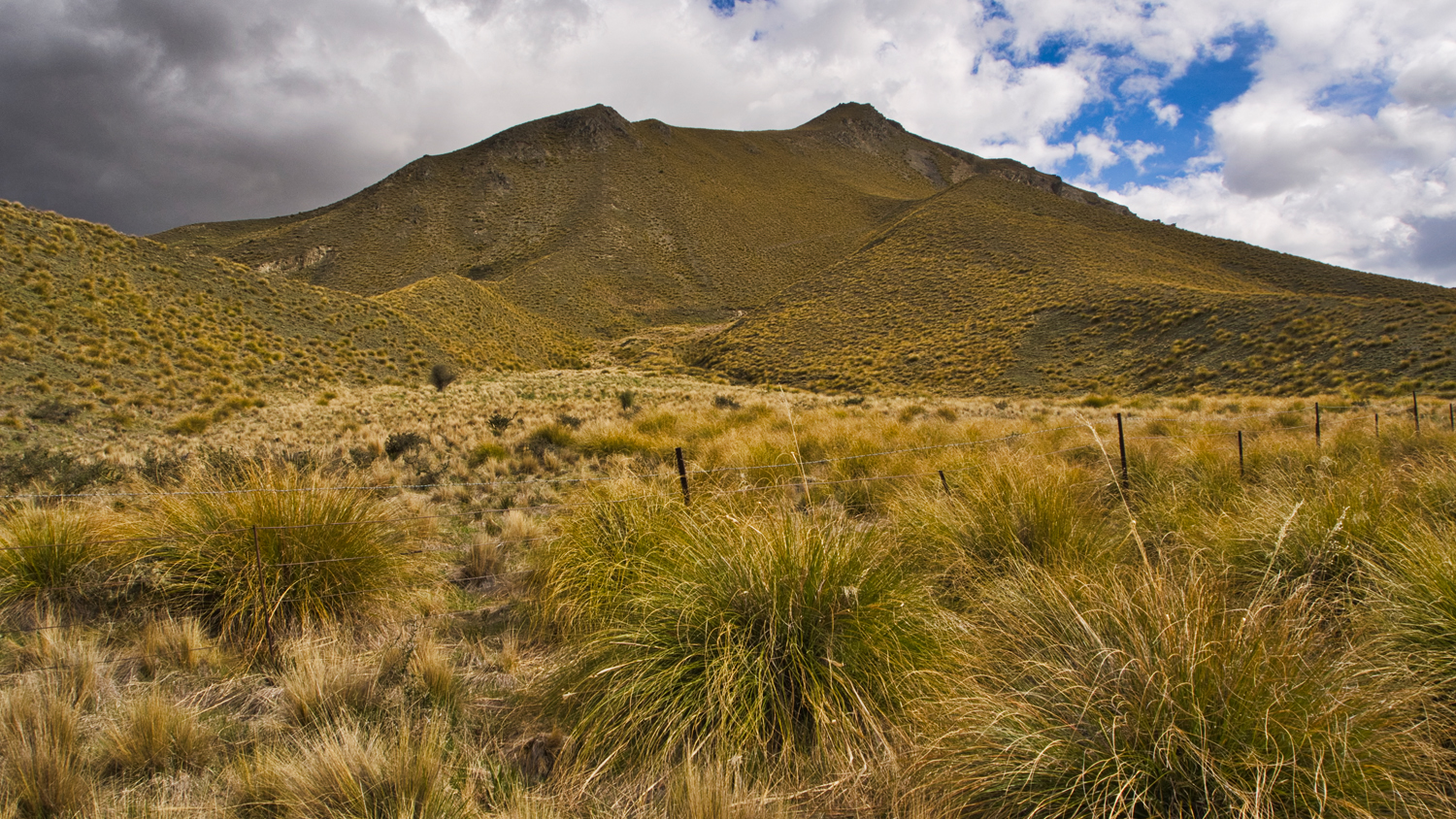 The Canterbury region boasts New Zealand’s highest peaks, many turquoise lakes and expanses of native tussock grasslands. I had the experience of driving through the Lindis Pass on State Highway 8 just as a huge storm was rolling in. At nearly 1000 m of elevation the pass is above the treeline, and tussock grass dominates the landscape.

For Lord of the Ring fans, wonderful scenery awaits you all along the route to Mt. Sunday, the site of Meduseld, the hall of King Theoden, ruler of the Edoras horse lords. 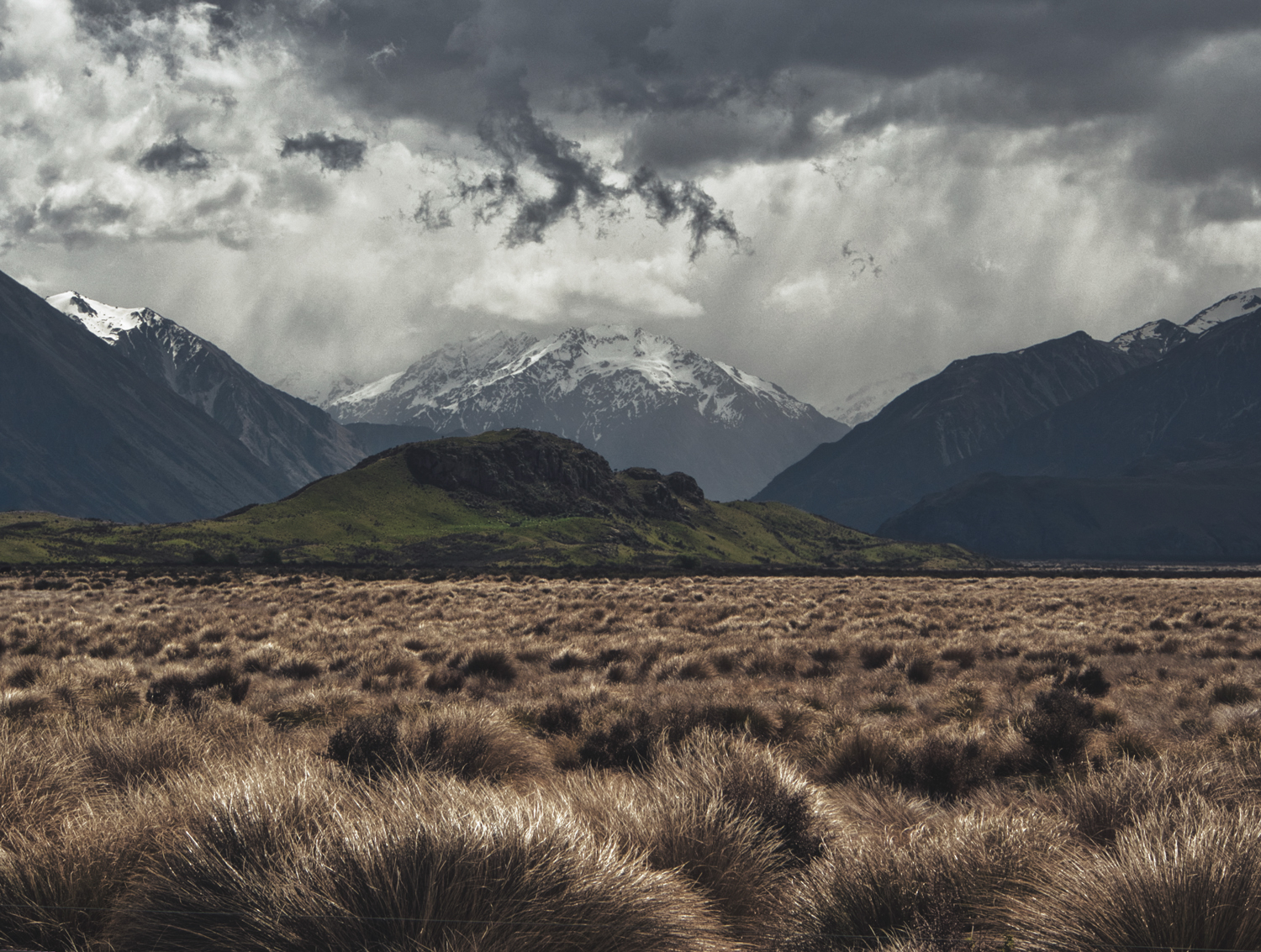 Mt. Sunday is located on the Mt. Potts sheep station in the Hakatere Conservation Park. The Lord of the Rings production crew took nine months to build the set at the top of Mt Sunday. After the film the area was returned to its former pristine state. 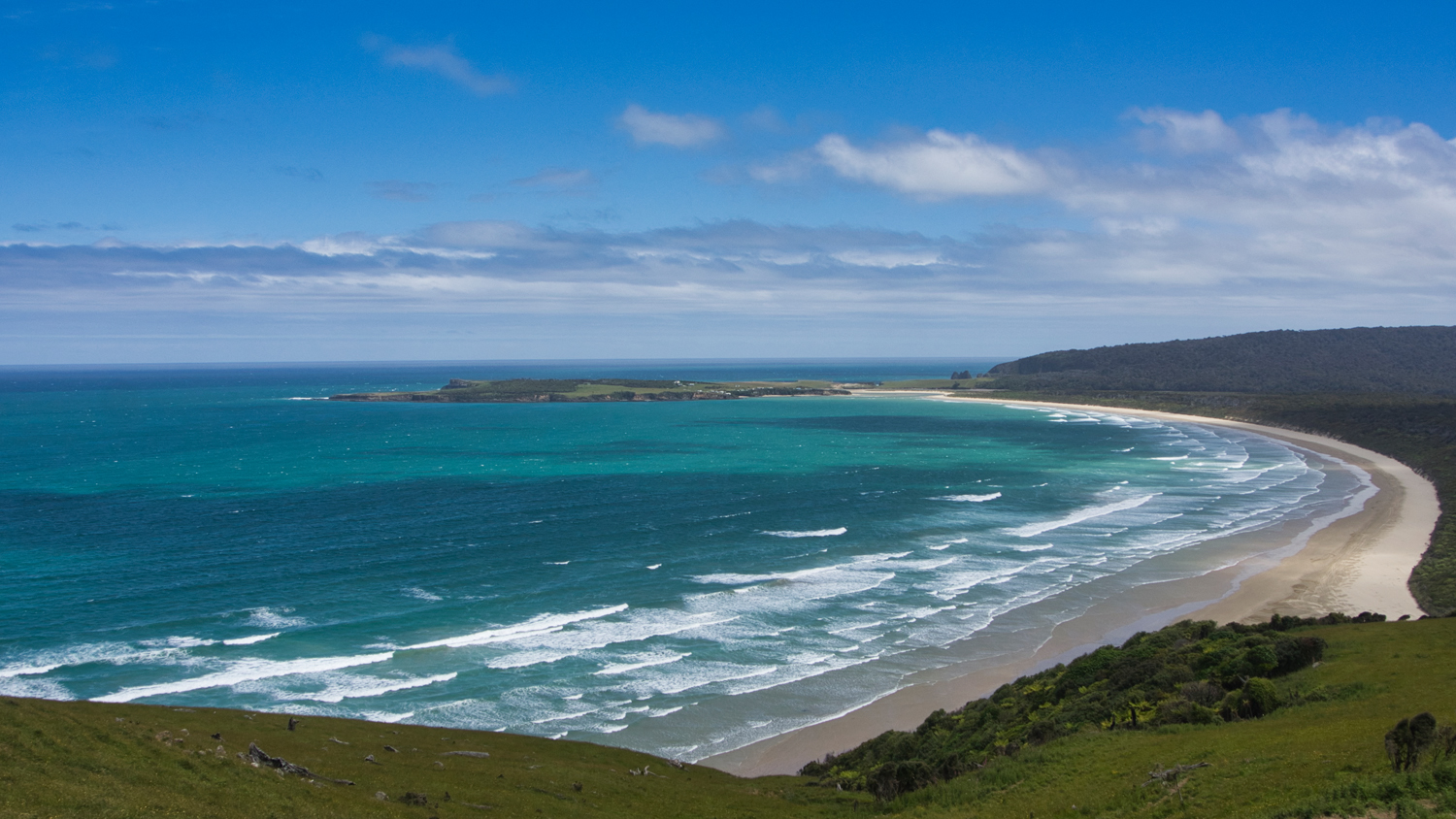 The Catlins Coast lies at the very bottom of the South Island. The southern Pacific Ocean stretches between this beach and Antarctica.

Beyond New Zealand
My work takes me beyond New Zealand, mostly to rural locations in tropical countries. I do evaluations of development programs funded by donors, and provide advice and support to implementing organisations on strengthening their own information collection and use. When traveling for work I make photographs when I can. 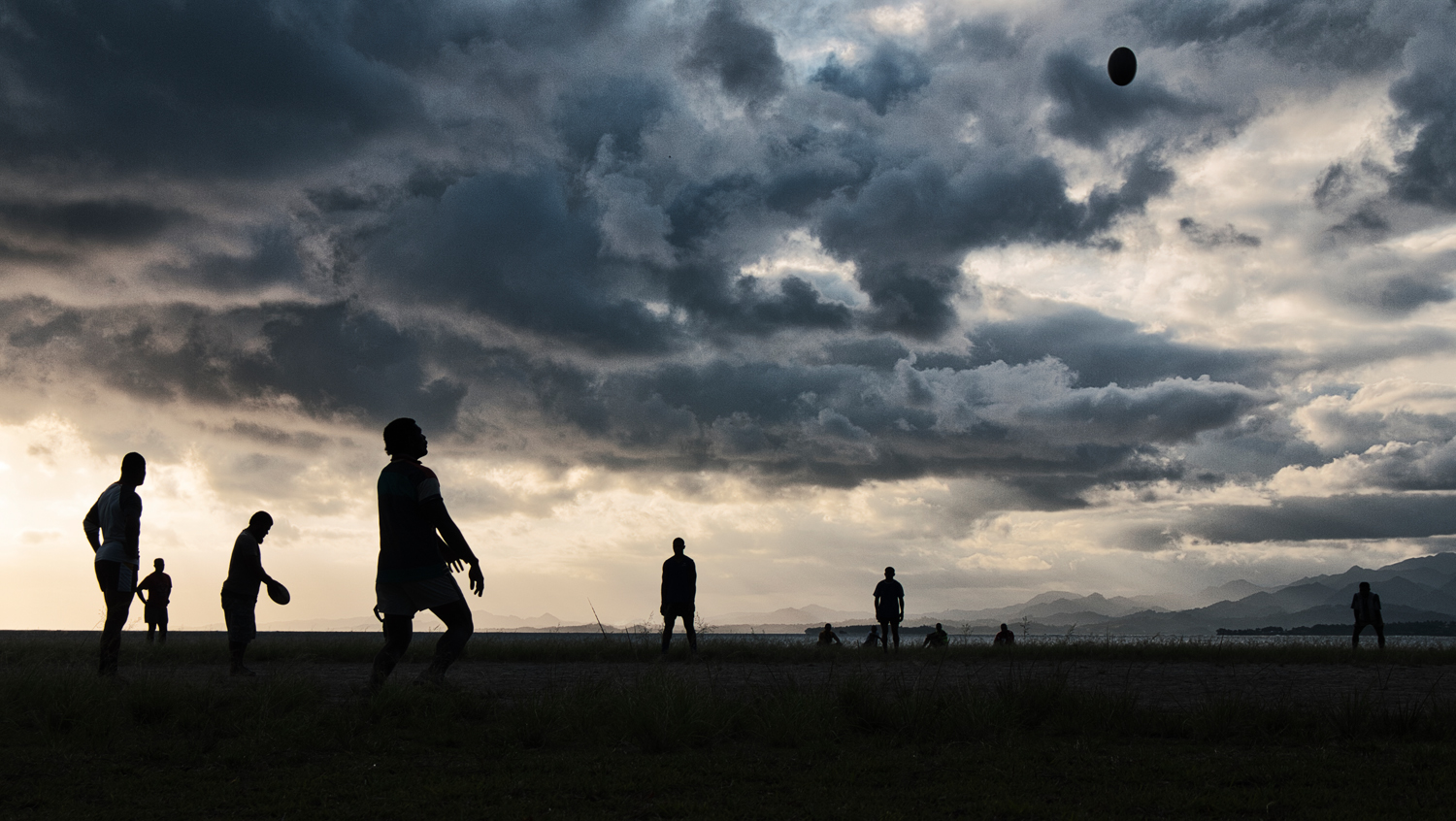 I like this silhouette of Fijians kicking a rugby ball around at the end of the day, against a background of dramatic clouds.

Finally, I’m honoured and humbled to share an image from the Autonomous Region of Bougainville, Papua New Guinea. This is one of the male advocates who works alongside women human rights defenders to end violence against women and children, and bring peace and healing to Bougainville. I’m still looking for a home on social media, but you can see some of my images at YouPic.

Photography is my meditation.

“Photography is my meditation. I started with a point-and-shoot in 2009 but soon wanted more. Not wanting to give up the small size I opted for mirrorless, and have never looked back!”

“Enjoy what you do” – Exclusive interview with Franz Rabe

Listening to nature is more important than the photograph itself

Therapy in a backpack