The Mueller Hut, New Zealand
After ascending and pressing forward through heavy rain and cold wind the evening before, my effort and perseverance has brought me here. Here, of all places. It feels like I shouldn’t be here, but there lies the glacier before me – in all its grandeur and magnificence. The streaks of blue and white that jet across the glacier of this mountain speak in cracks and rumbles as loud as thunder, and its words echo through the mountains around me. I had no idea it would feel like this, as I sat in front of my computer planning this trip the week before. I feel like I’m on the top of the world – a funny thought to me since I’m on the underside of it. As the clouds drift past me, I complete my capture of the majestic landscape before me.

Grand Teton National Park, USA
Soft morning light falls around me as the blue hour begins. It’s hard to believe that two hours have passed since I rolled out of bed at 4:00 that morning. This is my sixth attempt to capture this place at sunrise. It seems that luck has been against me on each visit as there is always been something. A breeze disturbing the reflection, a cloudless sky, or an overcast sky! I don’t mind another visit though. A short walk through the brisk morning air brings me to my spot, and I set up my equipment as I’ve rehearsed several times already in this beautiful place. It looks like the perfect morning this time. It’s a waiting game now as other travelers trickle in and surround me. You need to get up early to get this spot. As the sun begins to rise, the five short minutes of first light fly by in a blink of an eye as the sun climbs. Blue hour, first light, then time is up. I smile as I pack up my gear, believing that I finally got what I wanted – but could come back if I needed to. The Tetons are my home this summer.

Via Sacra, Rome, Italy
My father and I are dodging cars and sprinting to a finish line that won’t wait for anyone. The streets of Rome get busy as the sun begins to descend, and we’re running as fast as we can. The previous night we were minutes too late, and this was the final evening that this shot would be possible during our family trip to Rome. An ultra-marathon man, my father is much stronger than me so most of my gear is on his back while I keep up with my tripod in hand. As we arrive I begin to see the sun’s descent shining on the rooftops of this antique city. Fortunately, the night before I had dialed everything in. The tripod height, focal length, panorama head adjustments, exposure, graduated filters, this time I know what to do. Quickly I begin setting up to begin my captures. My frame is saturated with Roman History as I perform my calculated sweep from left to right, ten images in near-perfect alignment. I complete the first sweep in haste, my heart is still racing from the run, and a second with more precision. A third careful sweep is completed as the sun leaves the tops of these ancient structures. That was the one.

Grand Teton National Park, USA
This is the second weekend in a row that I’ve left school to make the two and a half hour drive out to Oxbow Bend in Grand Teton National Park. This morning is busy as always here, but I was lazy getting here early in the morning. Last weekend was far too green, and the aspen trees had work to do in their annual change of clothing. For photography this had been a somewhat disappointing weekend so far. Clouds completely shrouded any hope of that first morning light so I mostly came out today to do the best I could under the circumstances.

I sat and watched as time passed. Eventually, the clouds to the east began shifting and moving, allowing gaps of sunlight to spill onto the scene in patches. Patiently I waited a little longer for the right moment to manifest itself. And suddenly, it did. It truly did; golden light spilled onto the little yellow leaves that I love so much, clapping in the light breeze and Mt Moran’s cap simultaneously. As I sewed the panorama together the next day at my workstation, I teared up. This image was more beautiful than any I had hoped to capture that weekend. I may have been born in Utah, but my heart will always live in the Tetons.

As any professional photographer knows, photography is not a simple matter of point-and-click with a good camera. The images that I hold most precious are the ones that tell a story. They are stories of perseverance, trial, and error. They’re stories about repeated return trips, careful timing, and patience.

Two of these images required six return visits before I was happy with the result. Although I don’t label my previous efforts as photographic successes, I don’t regret a single visit to these places. Each morning was beautiful. The conditions simply weren’t perfect for the image I was searching for, and each time I visit a place it becomes more familiar. My relationship with it becomes more intimate. This is why I lived and worked in the Tetons for three summers during the summer-break between college semesters. I hiked through the park many times and visited these picture-perfect locations until I knew them by heart.

With that said, luck is still to be found. I have several favorite images that were captured on the fly with luck and practiced skill. This image of Lauterbrunnen was captured on the descent of my train ride to the valley. I had only seconds to see the view coming up through the trees, make rapid exposure adjustments and press the shutter at exactly the right moment. It was my knowledge of ETTL (exposure-to-the-left) while adjusting my exposure and compensating for the train’s movement that allowed me to capture such a high-contrast scene in a single frame without a filter. Only practice can help you know what strategy you need to use in such a fast-paced situation.

When planning a shoot, decisions must be made. Despite all the things I could have chosen to photograph while in Rome, I wanted this panorama of Il Foro Romano the most of all. Because I was unsuccessful the first evening, I made the decision to forego other images to try again. The result was an image that I believe captures the majesty and power of Rome – and includes everything from the Colosseum to the temples along the Via Sacra. I had other nights to make additional captures if necessary, but this image was the most important of all. If I hadn’t captured it the second night, I would have done my best to return.

Many of my shots have resulted from flexibility in my schedule as well. While driving to Oxbow Bend I discovered several elk in the field against the mountainside. I decided this opportunity was more important than the riverbend, and so I stopped to work with the elk instead. It took patience and silent effort to create a composition a safe distance from these majestic, wild animals, but my efforts paid off and the sacrifice was worth-while.

Photography is a beautiful challenge. I love the precision that it requires, the time that it takes, and the persistence it demands. My pursuits have led me to some of the world’s wild places and taught me difficult life lessons. As I sit and wait for the right moment to come, I’ve pondered some of life’s great mysteries and have come to appreciate the beauty around me.

So! If you see me on the streets of Rome, the plains beneath the Tetons or within the mountains of New Zealand, say hello! Just know that you can expect to see me again and again and again, right where you left me until I get it right. 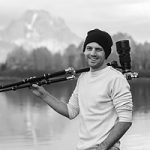 During his summer breaks from university studies, Brandon lived out of his car and worked in Jackson, Wyoming, where he wandered and photographed the Tetons during his time off. His time spent there became a pivotal experience to his personal style and photographic technique. He pursues realism in his images, seeking to share the moment as it really was, rather than modifying them into surreal works of art. “God’s in charge of the sunrise, I’m just here to capture it,” has become his mantra. His journey through Switzerland inspired him to add videography to his work that he hopes will entertain, uplift, and encourage his viewers to explore the endless beauty this world has to offer.

During his summer breaks from university studies, Brandon lived out of his car and worked in Jackson, Wyoming, where he wandered and photographed the Tetons during his time off. His time spent there became a pivotal experience to his personal style and photographic technique. He pursues realism in his images, seeking to share the moment as it really was, rather than modifying them into surreal works of art. “God’s in charge of the sunrise, I’m just here to capture it,” has become his mantra. His journey through Switzerland inspired him to add videography to his work that he hopes will entertain, uplift, and encourage his viewers to explore the endless beauty this world has to offer.

Posted on September 4, 2020September 3, 2020by Dániel Molnár
I am not a professional but an enthusiastic fan of photos who loves visual arts. I live in the capital of Hungary, Budapest, and I work for an International insurance company. As …
END_OF_DOCUMENT_TOKEN_TO_BE_REPLACED
Categories INSPIRATION

Posted on September 25, 2020September 23, 2020by Ron Mayhew
While no one ever mistook me for an art history expert, there is an expression that suits me well, “I know what I like.” And the Dutch Master Painters of the seventh century are a…
END_OF_DOCUMENT_TOKEN_TO_BE_REPLACED
Categories INSPIRATION

Posted on September 18, 2020September 17, 2020by Arvydas Rupeika
Hi, all! My name is Arvydas. I'm a construction engineer currently living in Oslo, Norway. All my life, I was a numbers guy: complex calculations, problem-solving, a lot of differ…
END_OF_DOCUMENT_TOKEN_TO_BE_REPLACED
Categories INSPIRATION

Posted on September 29, 2020September 30, 2020by Andrea Lazzarelli
My name is Andrea Lazzarelli, I am 60 years old, and I am a passionate Italian amateur photographer. I live in Traversetolo, a town in the province of Parma, at the foot of the Tu…
END_OF_DOCUMENT_TOKEN_TO_BE_REPLACED