Lightroom, Capture One and Olympus

I’ve had some concerns about the sharpness of the images from the Olympus. I felt there was a touch too much noise, adding an ever so slight but very annoying blur to the images. Although every other aspect of the camera is great, I was starting to doubt whether the speed, portability and weather proofing were worth the loss of sharpness in the image.

Well the worry is over, thanks to a friend who commented on the brightness of an image. This comment triggered a thought about RAW conversion. It turns out that native RAW conversion for Olympus images in Lightroom isn’t quite what it could be. In my opinion of course.

I decided to try some other software for comparison, including Affinity Photo, OV3, and Capture One. I wanted to compare the import of each of them. After a few tests, it was quite clear which one was better, but I carried on and tested with different images, as well as images taken with various lenses, just to be sure. I feel that the quality of the import in Capture One is the one that suits me best.

So this post is to show a few comparison images taken from a 100% crop of the title image. As I feel that Capture One has the best results, the comparisons are all with Lightroom and Capture One. I’ve used this image as it’s simple, has clean, crisp, clear colours without too many fine details to distract from the sharpness of the image elements.
This first image is a comparison of a jpeg export. The same file was imported into Lightroom and Capture One, and then exported as a jpeg without making any manual adjustments in either software.

I feel that the image from Capture One has more vibrant colours, the fine details of the petals, and the water droplets on the petals are clearer, and the bokeh is smoother.

The colours in the Lightroom image are in comparison, dull, and the noise is far more noticeable.
As I’ve been using Lightroom for a long time with images from a Sony camera, I’m used to the software, and I would of course prefer to stay with it, so the next step was to try and see what I could do within Lightroom to be able to get closer to the Capture One image, with the intention of applying these on import.

The setting that had the largest effect was to change the Profile in Camera Calibration from Adobe Standard to Camera Neutral. This brought out the vibrant colours that are evident in the Capture One image, but there was still the issue with noise.

The second change was in Noise Reduction. After a lot of adjusting, I settled on a setting of Luminance at 50 and Detail to 25. I’ve managed to get closer, but it’s still not quite there, and some of the detail is lost.

The change to the Camera Calibration could be set on import, but I think that the adjustments to the noise reduction would have to be individual to the image.

In the next comparison image I haven’t made any adjustments to the Capture One image, it is the same as the previous one, but the adjustments I’ve just described for Lightroom, have been applied.

The next comparison is of the complete image, exported from the corresponding software to jpeg with no manual adjustments applied. 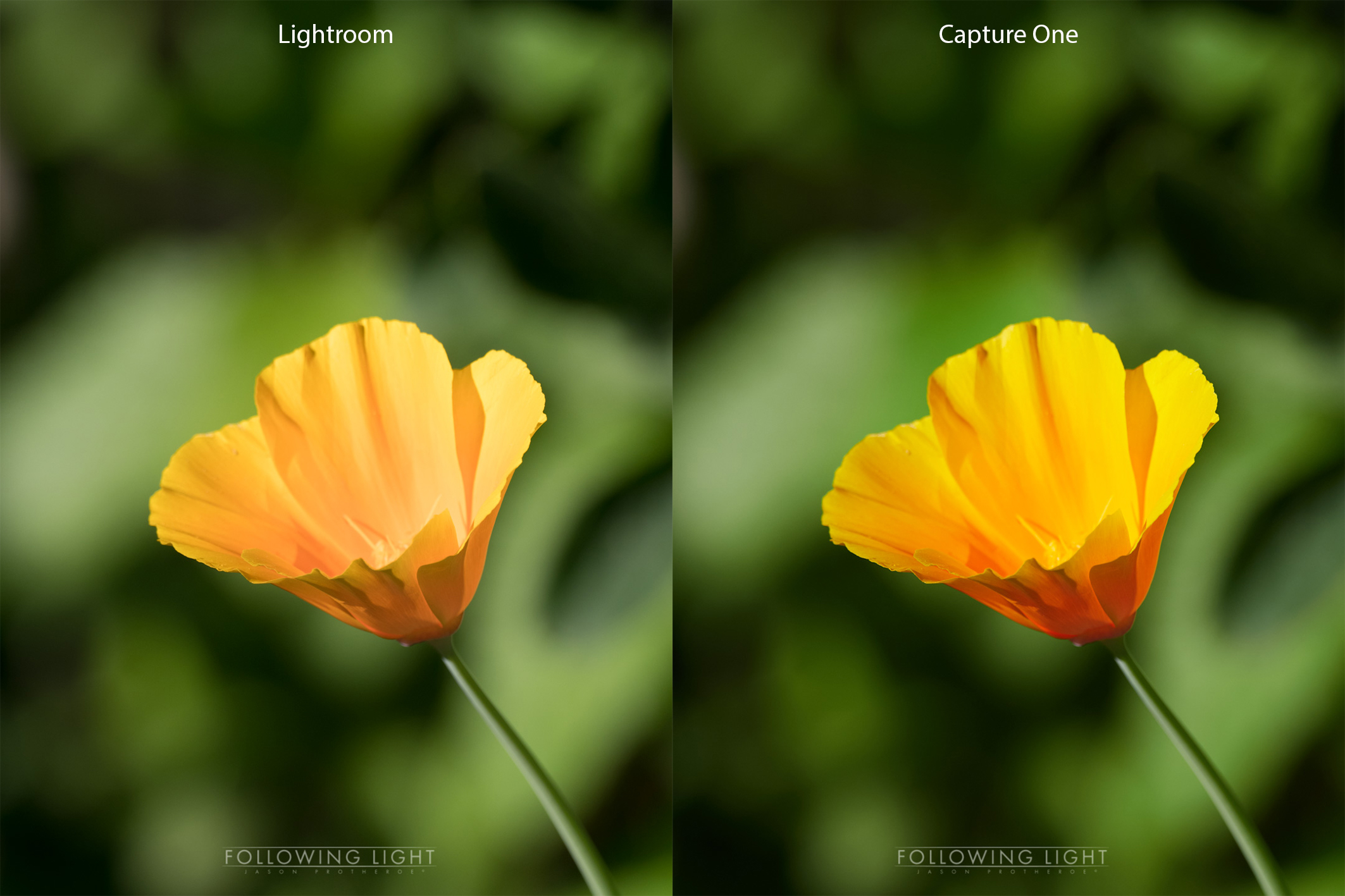 So in conclusion, I would be able to get closer to the quality of the native RAW conversion of Capture One within Lightroom, but this would involve manual noise reduction for each individual image and it still wouldn’t be as good as Capture One.

I am convinced that Capture One handles the RAW conversion of ORF files better than Lightroom, so until I get a better grip of Capture One, my workflow is to import ORF files in to Capture One, export them as tiff files, and then import these into Lightroom for processing. Not the cleanest way, but it works for me at the moment.

One final complete comparison with an image with a lot more fine details. With the content of other posts recently, one without an image of an Owl just seems wrong.
The details are a lot clearer, and the colours closer to reality. Although this can be seen throughout the image, it is most noticeable around the eyes. 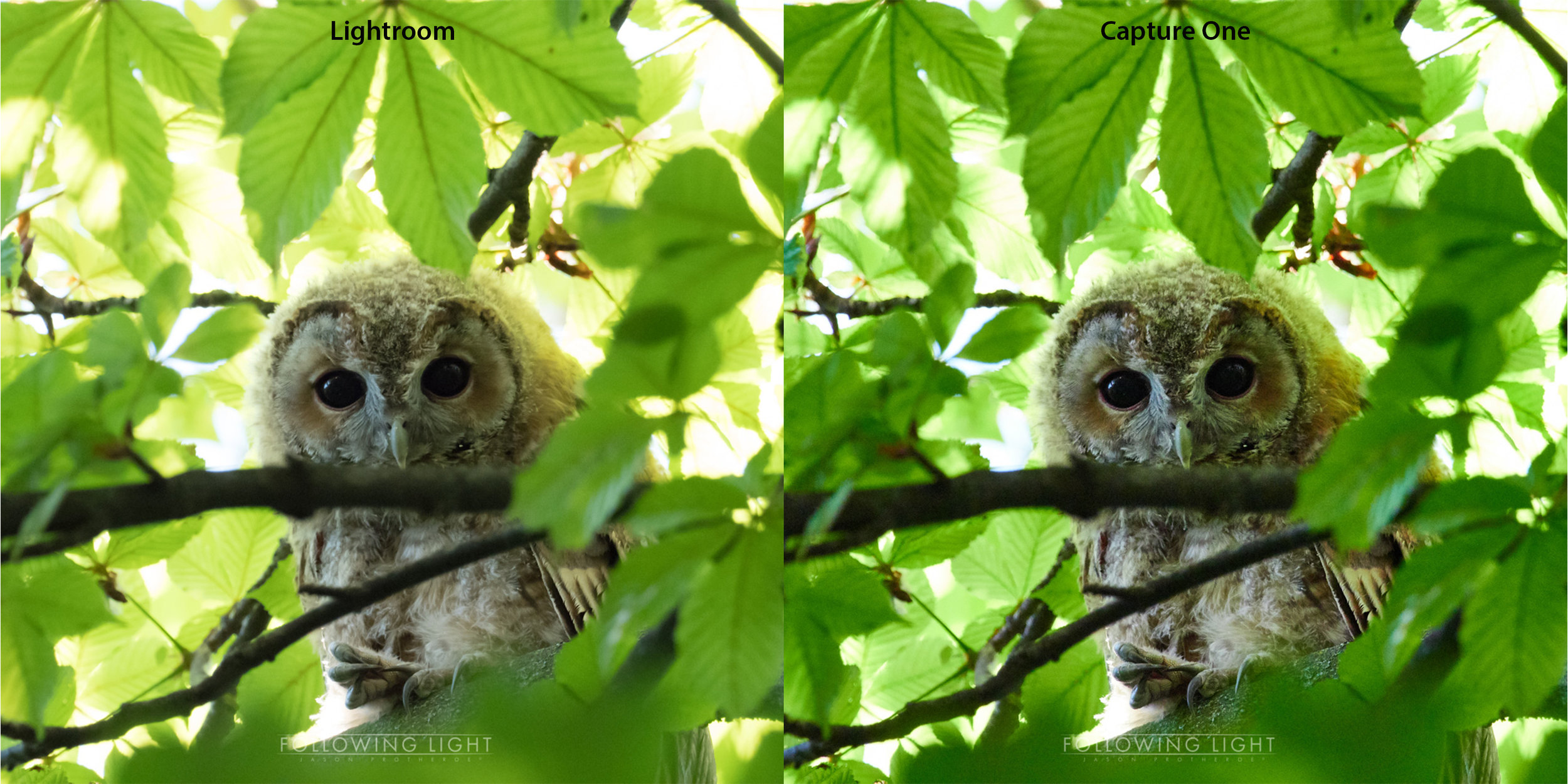 “I’m an outdoor photographer based in Basel, Switzerland. The photography bug was caught while hiking the Pembrokeshire Coastal Path in 2011. Living in Switzerland on the border of France and Germany, has given plenty of opportunities to nurture this further in the French Vosges Mountains, the German Black Forest, and the incredible Swiss Landscapes. In 2016 I started to dedicate more time to Photography. I created the Following Light blog as a place to share my experiences as well as show some of my work.”