Hello everyone! My name is Gaetano, an amateur photographer born in Palermo and raised in Bagheria, Sicily. Happily married and father of 3 children, I work in the restaurant business, and relatively recently, I started to cultivate a passion for photography. I bought my first DSLR camera in 2014, a Nikon APS-C. Subsequently, I changed equipment several times, from other Nikon APS-C to Nikon full-frame, Pentax and Canon, until in 2019, intrigued by the Micro 4/3 world, I decided to buy an Olympus OM-D E-M10 Mark 2 with the kit lenses, 14-42mm F3.5-5.6 and 40-150mm F4-5.6.

I must admit that it was love at first sight! You want it for the high build quality, although it is still an entry-level model… you want it for the ergonomics, the pleasure of use, the handling, the weight and the small dimensions compared to the competition. The convenience of being able to carry it always. For all these reasons, I think my “need” to always change equipment is over! To tell the truth, my dream is to one day have an E-M1 Mark 3 with some PRO optics. A lot of dreaming costs nothing, right?

But let’s go to the photo in question. The image you see is a shot that I had tried many other times before, although this place is an hour and a half drive from my house (about 100km). I had to set the alarm very early to get to the location at least a couple of hours before dawn! And for me, who finished work around midnight, it was not easy… That morning in mid-May, I left home around 3:30 am to get to Gangi (the town in the province of Palermo that is seen in the foreground) in time but…

Strangely, not foreseen by the weather forecast of the evening before which are usually very precise and correct (I use different applications to monitor the weather, from “Ventusky” to “Windy” and “Clear Outside”). A thick layer of fog enveloped everything! From the village of Gangi to the Etna volcano, which is about 90 km away!

After a first moment of despair, to my enormous joy, the mists slowly began to thin out and from them the unmistakable and majestic shape of the highest active volcano in Europe, Etna, made room! Which by the way, in a rare event, on the 19th of May it was all white! I immediately placed my trusty OM-D E-M10 Mark II with the “plastic fantastic” mounted on a Rollei C5i tripod, and with the (super!) OI.Share application from the smartphone, I began to take several photos.

Among the various photos I took, at 5:34 am, about 20 minutes before dawn, I immortalized this image that remains among my most beautiful, which gave me so many emotions!

I opened the file on Camera Raw, and after the first “basic” development, I completed the post-processing on Adobe Photoshop. On Camera Raw, it is simply a matter of balancing the contrast by acting on lights, shadows, whites and blacks.

Subsequently, a first white balance is made on hue and temperature. As for the sharpness on Camera Raw, with the Micro 4/3 files, I usually lower the sharpness details from 40 to 10 and increase the noise reduction around 10~15. Then I selectively add sharpness in Photoshop. I have not touched the contrast, clarity or haze sliders. With M.Zuiko optics, the lens correction occurs automatically, so I only activated the chromatic aberration correction and nothing else.

Then, continuing with Adobe Photoshop, I first converted the file into an advanced object and then a more complicated job was done to fix above all the general and selective colour balance, from the colours of the ground surface, the snow of the volcano, the colours and shades of the sky etc…

Then, through several passages with selection and colour range masks, the job to accentuate the volcano’s snow was done.

Finally, I applied the Orton effect, vignetting and selective sharpening with filter accentuating passage.
And here is the final result! 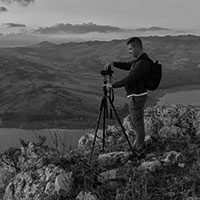 “My name is Gaetano, an amateur photographer born in Palermo and raised in Bagheria, Sicily. Happily married and father of 3 children, I work in the restaurant business, and relatively recently, I started to cultivate a passion for photography.”

"My name is Gaetano, an amateur photographer born in Palermo and raised in Bagheria, Sicily. Happily married and father of 3 children, I work in the restaurant business, and relatively recently, I started to cultivate a passion for photography."

My photographic journey: From capturing memories to creating great images

Posted on March 17, 2021March 16, 2021by Pantelis Paizanis
Hi, I am Pantelis, an amateur photographer from Thessaloniki, Greece. With my brother, I run a small business that manufactures candles. In my 40s now, I don't do sports anymore, …
END_OF_DOCUMENT_TOKEN_TO_BE_REPLACED
Categories INSPIRATION

Posted on March 9, 2021March 9, 2021by Antonio Benetti
From the mountains to the sea, there are small villages that seem straight out of a fairy tale. Small streets, artisan shops, romantic flowered balconies and breathtaking views. T…
END_OF_DOCUMENT_TOKEN_TO_BE_REPLACED
Categories INSPIRATION

My way of taking pictures

Posted on March 4, 2021March 9, 2021by Benjamin Wolf
I am a self taught photographer from Frankfurt/Main, Germany. I consider that photography is like my yoga — to concentrate on the subject I want to take a picture of, calm down an…
END_OF_DOCUMENT_TOKEN_TO_BE_REPLACED
Categories INSPIRATION

The Olympus EP2 and Infrared Photography