Over the past 12 months, thanks to my daughter, I have been lucky to become involved with a wonderful group of young people from southeast Queensland, Australia. These young people take their love of their companion birds to a next level; Free-Flying.
These birds are as dedicated to their human companions as the humans are to them. They are NOT “Pets”. In allowing their birds to fly freely without being in an aviary, trust is formed between the bird and handler.  Free Flight allows the birds to soar, jink and forage; and then return to their “person” when called. This provides these intelligent creatures with the much needed stimulation and exercises their brains and bodies need to live a healthy life; something that is difficult to replicate in a home environment.
Training begins in small steps; recalls from stand to person and back in a controlled area, like inside the home or outside using a harness and long tether line.  Gradually the distance is increased; obstacles are added like flying through a doorway or flying down from a door or higher.  Interestingly, birds do not really know how to descend from heights.  Their parents teach them during fledgling stages by encouraging them to fly from branch to branch.
The bond and love is very obvious when you see the groups come together.  Often the birds only do one flight; the rest of the time they are with their humans, cuddling, scratching and just being near them.
I’m no parrot/bird expert.  I’ve learnt so much watching the bond between bird and human; which is the most important part of Free Flight. Sometimes it doesn’t quite go to plan.  My daughter recently had an incident with her young Blue-Fronted Amazon where she landed in a tree and that’s where she spent the entire day and night.
It meant my daughter had to leave her for the night and return the next morning pre-dawn. The event ended happily with the bird finally being coaxed down by food. But this is just one of the risks the handlers take in giving their bird their freedom. There is always a risk. To think otherwise would be very irresponsible on the handler’s behalf.
Even for the more experienced fliers, there is always a chance something could go wrong; a sudden gust of wind, an unseen predator. But the risks far outweighs the alternative: a caged or clipped bird.
The variety of free flighted birds is incredible; ranging from the small Conures, Cockatiels, Lorikeets and Quakers, to the Amazons, Cockatoos and massive Macaws. Each bird has its own unique way of flying.  Some will flock, whereas others prefer to fly solo.  In some cases, the birds are just happy to forage on the ground and be close to their human.
My daughter has two birds.  One, Tuli, a Red-fronted Macaw is fully flighted and the other, Síofra, a Blue-fronted Amazon, has still a lot to learn after her recent overnight sojourn in the tree.  Tuli and Kire, my daughter, are the official ambassadors in Australia for the Red-fronted Macaws.  Sadly, there are less than 800 left in their native country of Bolivia, however, steps are being made to change that situation around with careful monitoring and protecting the birds from the illegal pet trade.  The Bolivian flag is based on the colours of the Red-fronted Macaw.
I’m still not that proficient when it comes to capturing birds in flight, however, what I have captured I’m extremely pleased with. My gear is the Olympus E-M1 MkII with the 40-150mm f/2.8. I’ve tried different focus points and found what works better for me is a single centre, using CAF most of the time. Depending on what I want to capture, I may shift to ProCapL.  I rarely use a shutter speed below 1/1000s and generally, it is up around 1/3000s+.  I also leave my ISO set on Auto, mainly due to the birds being in different light settings as they fly.
When the birds aren’t out flying freely, during the day they are contained for their own safety in aviaries.  Most aviaries are larger than 4m x 2m, so the birds still have the ability to stretch their wings.  Also, they have plenty of toys to keep them amused during the day as well as plenty of foraging opportunities; again to keep them amused and stimulated.  These birds aren’t just taken out once a week and then forgotten.  They are a life-long commitment and some may even outlive their humans.
Throughout the world there are groups such as the one in southeast Queensland.  I know several likeminded groups in the UK, USA, Philippines and Singapore, so the ability to capture birds in flight isn’t as difficult as you may think.  Just check on Facebook and you’ll be surprised at the number of groups who love having their babies photographed. 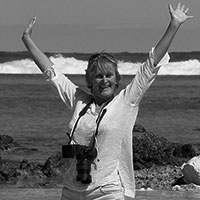 Karen Willshaw, Australian landscape and underwater photographer specialising in photography from around the beautiful and remote coral atoll, the Cocos (Keeling) Islands.  Through her photography, Karen is ‘bringing Cocos to the world‘ creating awareness of the Islands and showcasing their natural unspoilt beauty both above and below the waterline.

Karen Willshaw, Australian landscape and underwater photographer specialising in photography from around the beautiful and remote coral atoll, the Cocos (Keeling) Islands.  Through her photography, Karen is ‘bringing Cocos to the world‘ creating awareness of the Islands and showcasing their natural unspoilt beauty both above and below the waterline.

Three Continents, Two Lenses – How Olympus turned me into an unlikely travel writer

Posted on October 9, 2020October 7, 2020by Gregory Leporati
Confession: I used to hate photography. But as a journalist and communications specialist, it has always been an important and unavoidable part of what I do for a living. I found …
END_OF_DOCUMENT_TOKEN_TO_BE_REPLACED
Categories INSPIRATION

Posted on September 25, 2020September 23, 2020by Ron Mayhew
While no one ever mistook me for an art history expert, there is an expression that suits me well, “I know what I like.” And the Dutch Master Painters of the seventh century are a…
END_OF_DOCUMENT_TOKEN_TO_BE_REPLACED
Categories INSPIRATION

Posted on September 11, 2020September 11, 2020by Torjan Haaland
My interest in photography started early in my studies at the age of 22. The first camera I ever bought was the Canon EOS 450D. A great starting camera at that time, and the camer…
END_OF_DOCUMENT_TOKEN_TO_BE_REPLACED
Categories INSPIRATION

Posted on October 20, 2020October 19, 2020by Jim Chung
I live in Toronto with my family and divide my time working as a health professional and as a professional sports photographer and writer. Like most people, I began by shooting fa…
END_OF_DOCUMENT_TOKEN_TO_BE_REPLACED