Hi Alex! Would you like to start by introducing yourself?
Hey, I am Alex Ratson, a life long climber with a strong passion for visual story telling.

You have a passion for everything about the outdoors, right? From hiking to kayaking, but mostly climbing. How it all began?
I started climbing at the ripe young age of 5. Through my whole youth i was fully obsessed with climbing, that is all i wanted to do and everything I did in life revolved around climbing, from learning the craft to getting out after it. My dad was a strong supporter of this which really enabled me as a kid.

We noticed that you don’t just capture the best moments of your outdoor activities, but you go much further, producing unique breathtaking images, always pushing the limits. How did photography come into your life and what’s its current role?
When I was around 13 I started packing a camera around with me. No doubt this was inspired by the many climbing heroes I would read about. I was always inspired by the photos in their books or the magazines. One of my idoles back then was the late Gallen Rowell who was as much a climber as he was a world class photographer. As I continued to evolve in my photography I always used him as my benchmark for excellence.

Once I was out of school I spent the first half of my 20’s working in photojournalism. I always enjoyed the spontaneity of having so many uncontrolled factors. No doubt a lot of my assignments although high stressed pailed in comparison to some of the stresses I felt in the mountains which is why I think I was drawn more down the journalism stream Vs the commercialized studio stream.

Fast forward to current times, the bulk of my work is definitely based around climbing although I also get called on for other adventure based assignments where the subject might not be climbing related but the shooting environment is remote/wilderness, or requiring technical access.

Speaking specifically of Climbing Photography, generally the photos are more flattering taken from a higher plane, right? When you start a photo shoot, do you have a plan drawn up in advance, or is it something that comes naturally to you in the moment?
It can be a bit of both depending on the shoot. Generally, when I am assigned to a shoot, especially if it has a broad scope I will do quite a bit of pre-production. From making shot lists, researching on location light, and do a location scout if possible.

The first question when it comes to a location is how do you gain access to the ideal shooting positions. Commonly I will climb the same route or an adjacent route so that I can fix a rope for me to work from.

At the other end of the spectrom I do a lot of shooting that is pure reportage in style. This is commonly either me being inbeaded with another climbing team or an active member of the climbing team. With this style it’s a lot more of “take what you can get”. I will commonly try and get ahead or behind the group to get a good angle. I find that my journalism background really pays off here as it is quite similar in nature.

In this kind of photography, you have to think not only about the camera settings, focusing, framing, timing, but also (mainly) on your safety. Have you ever had any accident while shooting? Or the other way round, any equipment damaged during the climb?
I always tell people, when it comes to this type of work 80% is access and in my opinion you need to be right in the action, and not at a distance with a telephoto lens.

The photography in abstract is actually really simple. It’s kind of like a portrait session or street photography… just in a vertical environment that has high consequences.

I have not had any accidents while shooting. I tend to only climb and work with people who are pretty invested in the sport and team safety. We are all out there double checking each other giving full disclosure to any voluntary risk that is being taken.

That being said, while not shooting I have had a couple injuries while climbing including blown ankles, fractured ribs from a fall and getting hit by good size rock in my back. In general I have been pretty lucky considering how long I have been at this and most of those injuries came from “acts of god” as I like to call them Vs making a rookie mistake.

Talking about equipment now, how long have you been using Olympus and what reasons led you to move from your previous Fuji X100T?
I have been shooting with Olympus since 2012 with the original EM-5. Prior to that I shot on Nikon, first film, then digital. When I first went to a mirrorless with the EM-5, I felt it had some shortcomings so I experimented with Sony and Fuji. Although I really enjoyed the rangefinder feel of the Fuji and the video quality of the Sony both were really lacking in both durability and in body stabilization which the Olympus excelled at. In my opinion the Olympus Pro bodies are the best built mirrorless on the market.

I also have a medium format film kit which consists of a Bronica SQ-A (6X6) and a couple lenses along with the MIGHTY Holga. 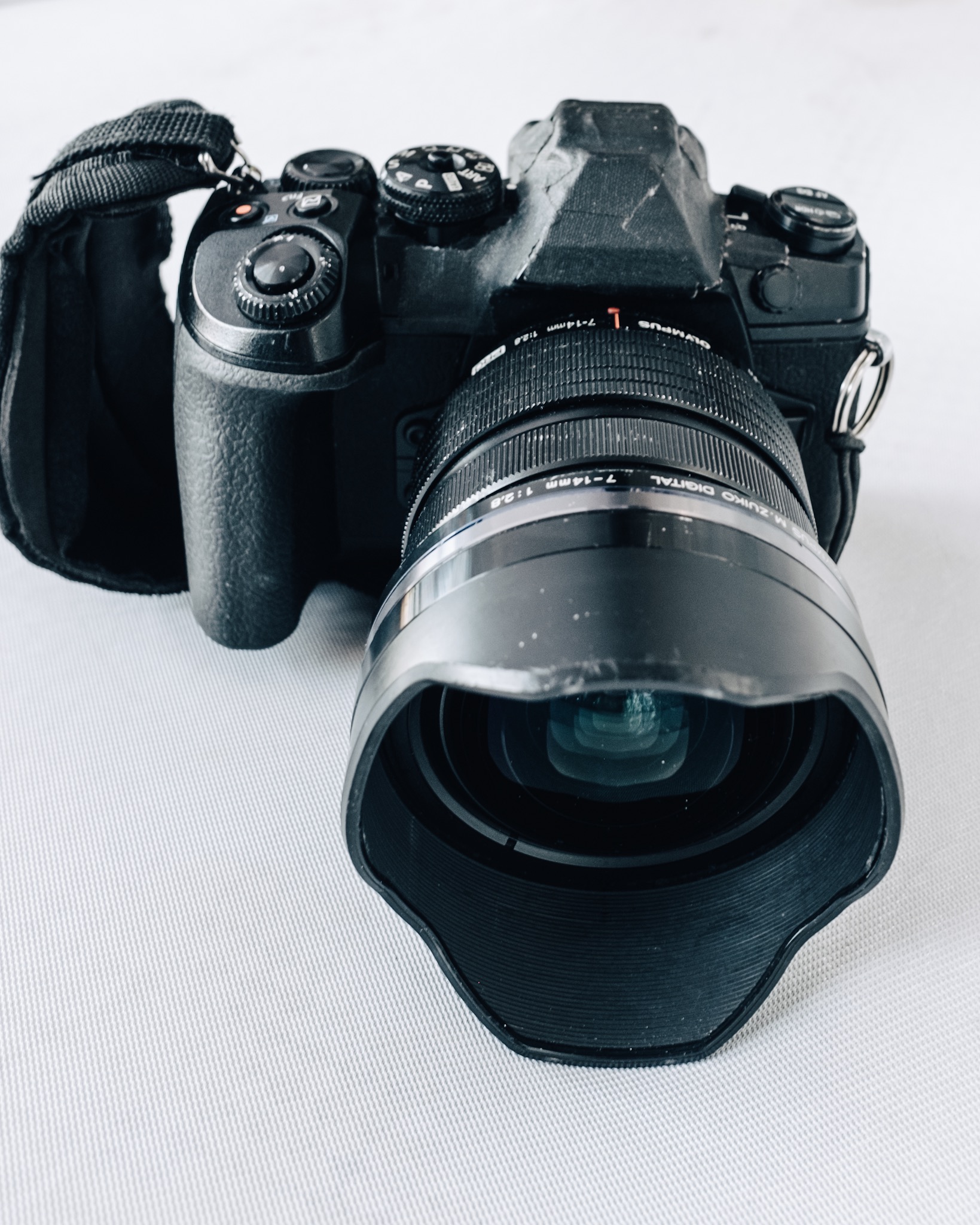 Who has more scars, you or your camera? Could you show us a photo? From your camera of course! 🙂
I think we are pretty equal although the camera has the unfair advantage of being replaced every couple of years! I have the camera taped up pretty good which helps protect it from typical scratches.

Now a little more seriously, carrying your photographic equipment with you during the travels and climbing, it is subjected to some knocks, dust, cold, humidity, snow. What special cares do you take with the maintenance of your Olympus? Any serious problems so far?
First off, I have tried so many bags and carrying methods… they all suck!

My go to now is using the Atlas Athlete camera pack with a peak Design Capture clip. Once I am on location I slim things down, usually climbing with just my camera and a small pack with maybe a second lens along with my “camera Survival Kit”: a Peak design Field Pouch which has all the go to odd’s and ends/accessories needed. I can grab this pouch and add it to any bag knowing I am not missing anything.

Regardless of things though I try and keep my EM-1 MkII out with one of my two wide lenses on and no lens caps. Things can happen so fast and having a camera in a bag does you no good in these situations. No doubt the camera gets knocked around, and covered in snow, water and dust although did I mention how bomb proof the Olympus Pro bodies are? This is exactly why I chose the Olympus over the competition.

In my “digital survival kit” i always have both 2 micro fiber cloths and a Rocket Airblower. It’s easy to get tons of dust, snow… and just general junk that ends up on your exposed camera and lenses when you always have it out at the ready.

My cleaning strategy on location is to try and clean as much as I can with the rocket blower, just blowing all the junk off. This is the most effective means of cleaning I find and does not involve having to touch your lens element which when you are in a fast paced environment can result in accidentally further contaminating the lens.

With my microfiber cloths I always have two. One of them (a large one) I use exclusively for wiping the gear down in full, excluding lens elements. Often this will be for drying gear off before putting it back inside my Atlas pack. My second cloth, which is a smaller one made by London Drugs folds up into a small pouch which is what I use exclusively for cleaning lens elements. Because it folds up so small it’s easy to keep it dry and on me at all times while on location.

The environment is also generally quite harsh temperature wise. When shooting in the Winter I will commonly cycle batteries between the camera and a Napoleon pocket (breast pocket) in my midlayer.

The thing with the cold and batteries is that they are not actually dead when they say they are dead… they are just cold so I find that if a battery says its low/dead I can swap it with a warm battery and by the time the warm battery is to cold the original one that I took out has warmed up enough to swap back in.

Knock on wood, I have had no true operating issues from the environment. I think the worst thing that has happened to me on this topic is having my viewfinder getting filled with snow and ice so that I couldn’t see through it. My solution to this is somewhat archaic in that legit take some lite swings with my ice axe at the viewfinder to chip the ice away… There may be some scratches from my lite swing being not quite lite enough lol.

Thank you Alex for this interview! Any last words?
I appreciate the good conversation talking all things Olympus. If anyone ever wants to talk further, especially on how to best use your Olympus gear in an adventure sports setting don’t hesitate to shoot me a message.

I also want to encourage people to keep the conversation alive with me on my Instagram account: @aratson

“Rock & Ice Climber – all-round adventurer. My camera is merely a witness to my adventures.”

"Rock & Ice Climber - all-round adventurer. My camera is merely a witness to my adventures."

Posted on June 7, 2022June 6, 2022by Kevin Hugo
My name is Kevin Hugo and I live in a small town in the Wiltshire countryside in the UK. I started taking photographs when I was given my first camera as a child. This was a si…
END_OF_DOCUMENT_TOKEN_TO_BE_REPLACED
Categories INSPIRATION

Posted on May 24, 2022May 23, 2022by Enrico Simeon
Hi, my name is Enrico, I am 33 years old, and I live in a small town on the outskirts of Udine, in Friuli Venezia Giulia, in the northeast of Italy. I am a biologist, and I work a…
END_OF_DOCUMENT_TOKEN_TO_BE_REPLACED
Categories INSPIRATION

Posted on May 11, 2022May 11, 2022by Heinrich Lischka
I was born in Poland in 1968, and when I was 20 years old, I left for Germany. I have been working as a graphic designer for over 20 years. I live in Germany in Leipzig. In the 90…
END_OF_DOCUMENT_TOKEN_TO_BE_REPLACED
Categories INSPIRATION

Posted on May 5, 2022May 5, 2022by Axel Mols
I’m Axel, a 35 year-old amateur photographer and professional chef. I live in a small city in the south of the Netherlands, called Tilburg. In my spare time, I am a bit of a he…
END_OF_DOCUMENT_TOKEN_TO_BE_REPLACED