A decision several years ago to embark on getting more serious about still photography found me holding out my hand and having the beautiful E-M5 (the original) placed firmly in my palm. I was naively looking through a camera store on the hunt for the camera that would fit my needs the question aimed at the young shop assistant was pretty direct… “I need a camera that’s easy to use and will give me pro results” it also needed to be up to taking a bit of punishment, as at the time I was involved in a lot of outdoor activity, hiking through back country up streams and on beaches, “I don’t need something too big it has to be portable”. He reached into the store display cabinet and pulled out a shiny new Olympus E-M5 and said this is what you are looking for. “Ok so this is a DSLR right?” “Not quite” was the answer and then the ensuing sales pitch and tech talk about some new smaller sensor system, all this went over my head, the most important thing I needed to know was is this thing capable of taking good pictures? “Well YES” was his answer. “Done I’ll take it”! Well why procrastinate about these things. And that’s where it started the day I decided to finally get serious about photography and do something about it.

Since then my knowledge and camera collection has grown but the Olympus brand very much dominates my current collection. A decision 5 years ago to start experimenting with analogue film photography also yielded the purchase of another Olympus camera, the OM2n for some reason they have become my first camera of choice, and the decision to experiment with 35mm film photography has only heightened my respect for Olympus as a camera brand. The fact that I am still successfully shooting cameras that were manufactured up to 50 years ago really does make a huge statement about the legacy Olympus as a company have created. The cameras for me have a special appeal and feel about them, well crafted, good looking and providers of top imagery. I’m also crazy about Leica cameras, and I get the same vibe from shooting Olympus as I do when I’m out using one of my Leica M series cameras.

Since making the decision to jump headlong into photography I have worked hard at developing my style or trying to define what that might be. I’m very big on capturing local content, I have moved around a wee bit over the past 4 years and in that time have tried to make my main photographic focus on local things, you see I love street photography or so called street photography, but when I sat down and studied the photographers that influenced me it soon became apparent that they were not shooting “street” rather they were shooting their “everyday” and I think that’s something that gets overlooked and misinterpreted at times. I think Winogrand for instance shot street because that was his neighbourhood, he was a New York based photographer shooting his neighbourhood. I think that gets confused sometimes, these guys were shooting subjects they were familiar with it was their everyday. I live in a Rural community in New Zealand, and that’s a valid subject for me, it’s unique to me and once I recognised that it made me more aware, that if I want my work to stand out then the subject matter is right there staring me in the face. I just have to pluck up the courage to go out there and get it. That’s something I’m working on. This was also aided by recognising and looking towards NZ photographers of the past and becoming influenced by their work for example Ans Westra is amazing, to me she is New Zealand’s “Robert Frank” I have so much admiration for her work and the courage it took to assemble her portfolio… amazing she is a big inspiration!

I also really enjoy traveling and for me a big part of that is about the chance to photograph new environments and locations, people etc. But the choice of travel often brings the inevitable question and ensuing problem of what to pack? On a recent trip to Melbourne I had this exact problem. I really hate clutter and I like to travel as light as possible, this also applies to my camera gear, but inevitably it leads to the usual dilemmas… what lens? What body? Oh yes do I want to shoot film? But on this trip I think I finally found my perfect travel combo. I had to shoot an event, I also wanted to shoot some street and I couldn’t do the Melbourne thing without shooting a roll of film. My solution was a revelation, The E-M5 MK2 w/ 17mm and 45mm Mzuiko F1.8 and the amazing little Pen ee2, done all bases covered! My whole camera set up 2 bodies 2 lenses pretty much fitted into the palm of my hand!

The 17mm F1.8 was my first quality lens purchase and to this day still one of my favourites of the Olympus system, love the aesthetics of that lens, and then you have the 45mm F1.8 just simply gorgeous and unfortunately one of those lenses I just don’t get to use enough, but when I do I’m left always scratching my head as to why it’s not a more regular fixture on either my E-M1 MK2 or E-M5 MK2. And then the Pen EE2 a camera my daughter picked up at a flea market for a $1, I just love this camera so simple, so perfect for street photography and unbelievable quality for an old point and shoot. I always think of the Olympus Pen system as the original “Micro Four Thirds” camera the half frame camera that doubles the yield of any roll of film.

Going forward I’m really excited about my Youtube channel, and enjoying the extra exposure it is bringing to my work, it’s been amazing! I think it really goes to show that if you are prepared to put the work in and take the chance to expose who you are to a potentially larger audience the benefits are there. I regularly hear from other photographers that it’s getting more and more difficult in today’s environment to make it in photography and I tend to disagree, instead we should be embracing the wonders we have at our finger tips. Just have think about it, put yourself back 50 years and try to imagine how difficult it would have been to gain exposure for your craft and art back in those times? Today however I am able to self-publish my own content via multiple platforms to a potential worldwide audience of millions, just mind blowing. Yes I know there is saturation of content but quality content is still in the minority and if you are willing to put the work in and produce high quality photography and other visual media then the opportunities are there. The audience is massive, you just have to find that audience and bring them along for YOUR ride. It also bares out the need for photographers to diversify their skill set, not only should we be looking at honing a craft as still image photographers but advance that same technique and style into the moving media … video in other words. Today’s photographers who are making it happen often are film makers as well and combining both skill sets to advance their work in the industry. We live in exciting times, can’t wait to see where the road will lead me! 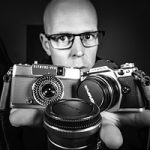 “I am a photographer and content creator based in Auckland New Zealand.”

"I am a photographer and content creator based in Auckland New Zealand."

Posted on May 13, 2020May 13, 2020by Hugo Pinho
Most of my work, what I really like to do, is documentary photography and that usually involves making portraits. But unlike the studio photographer who is able to manipulate ligh…
END_OF_DOCUMENT_TOKEN_TO_BE_REPLACED
Categories INSPIRATION

Posted on May 5, 2020May 5, 2020by Szilveszter Nemeth
Hi Everyone, let me introduce myself:My name is Szilveszter Nemeth. I am from Hungary. I am working as an SAP specialist. I wanted to challenge myself professionally so I moved to…
END_OF_DOCUMENT_TOKEN_TO_BE_REPLACED
Categories INSPIRATION

Posted on April 29, 2020April 29, 2020by Miquel Serra
My name is Miquel, I am 22 years old and I live in Catalonia, Spain. I am a university student, currently doing an Erasmus in Scotland in Business and Economics. My interest in ph…
END_OF_DOCUMENT_TOKEN_TO_BE_REPLACED