Getting in 6th place in the Wiki Loves Earth 2019 photo contest and besting thousands of entries happened because of friends, lineage, and my trusty Olympus camera. But in order for the people to understand how it came to be, I must first explain the place and the events that followed and how I got my winning photograph.

Bukidnon is one of the most enchanting places in the Philippines. It is located up north in the island of Mindanao, a landlocked province which 7 indigenous people groups call home. Every end of March till the first week of April, the whole province celebrates Kaamulan. A gathering and festivity where the people of the mountains come together and perform rituals to pray to their deities for a bountiful harvest. One may have been to many festivals all over the Philippines, but this is the most authentic of them all. As a travel photographer, I’ve photographed the festival for years already and I’ve come to realize that its also time that the world sees the beauty of their domains. As a descendant from one of these indigenous people groups, or tribes if you will, I’ve somehow taken up the responsibility to photograph their culture, tradition, and tribal domains to preserve what little I can. Working closely with the Department of Tourism of Region 10, I believe that my photographs have spread awareness that these people still exist and they are very much part of the history of the country.

One morning during the last week of March, I and my friends did a road trip to the city of Malaybalay to see the ongoing activities of the Kaamulan Festival. However, we wanted more of an adventure than the bustling city’s scene and so we set out to Valencia City and ended up in the municipality of Quezon. Quezon is currently being developed as the rock wall climbing capital of the country through the efforts of a good friend and legendary Filipino climber, Mackie Makinano, and the local government unit of Quezon led by Mayor Gue. An estimate of more than 300 routes are being established through collaborative efforts with the Quezon bolting team and Sir Jboy Sanchez in the Kiokong wall.

Beneath the rock wall is the Pulangi River, one of the longest rivers in the country which stretches for miles on end towards the southernmost part of the Philippines. There is a place however just below the wall which the locals refer to as the Blue Water Cave.

Literally, it is how it is called. No matter how brown the water is in the river beside it, the water from deep within the cave is blue. A good 20 to 25 minutes walk through hard terrain (hard terrain is going down a cliff) from the parking area leads you to a set of rock formations at the side of the river. with makeshift ropes and vines to hold on to, it was the adventure that we were looking for. What I had with me was my Olympus OMD EM 10 Mark II and the 14-42mm kit lens. 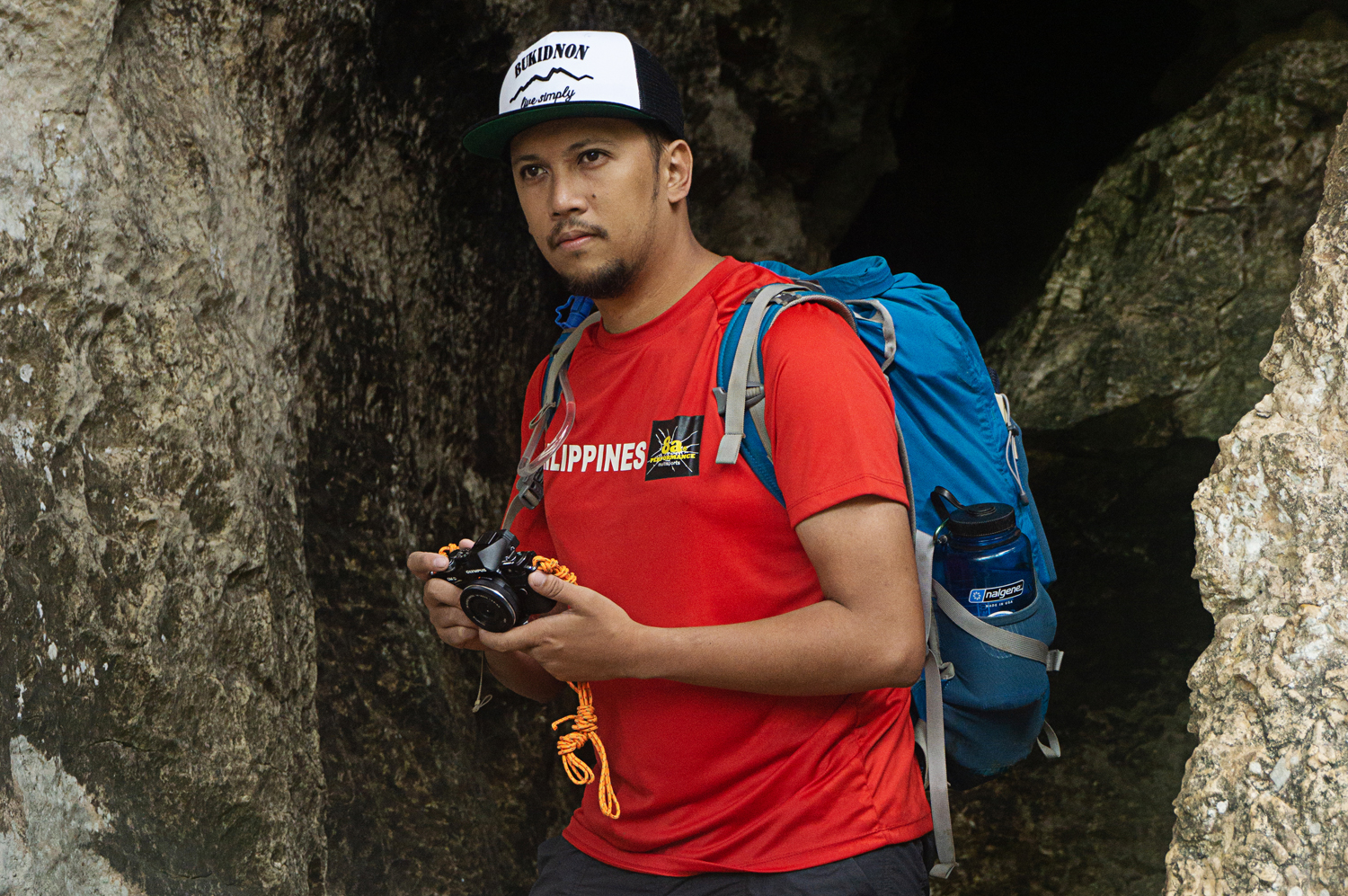 The camera was tucked away inside my waterproof backpack, the backpack wasn’t made for photography equipment so I used a small camera insert and put the camera there. A foldable tripod is what I bring around with me when I travel, it’s not as sturdy like the standard ones, but it does the job. While my friend North, Euge, and Chin were also doing some photos and enjoying the place, I searched for a good spot. A spot where the water, the light, and the cave can be seen in one frame. The tripod was halfway submerged in the water and the current was shifting from fast to slow, and with scenarios like these photographers would often worry if they’ll get a blurry shot. Thanks to the IBIS of Olympus, we got ourselves a good photograph. It was a magical moment as the light slowly shone down into the cave, the blue and white colors of the water rushing out, and I was just there in the corner standing in silence with my camera. The cave is oftentimes not included by tourists and travelers in their Bukidnon trips because it is not yet well known to the masses. 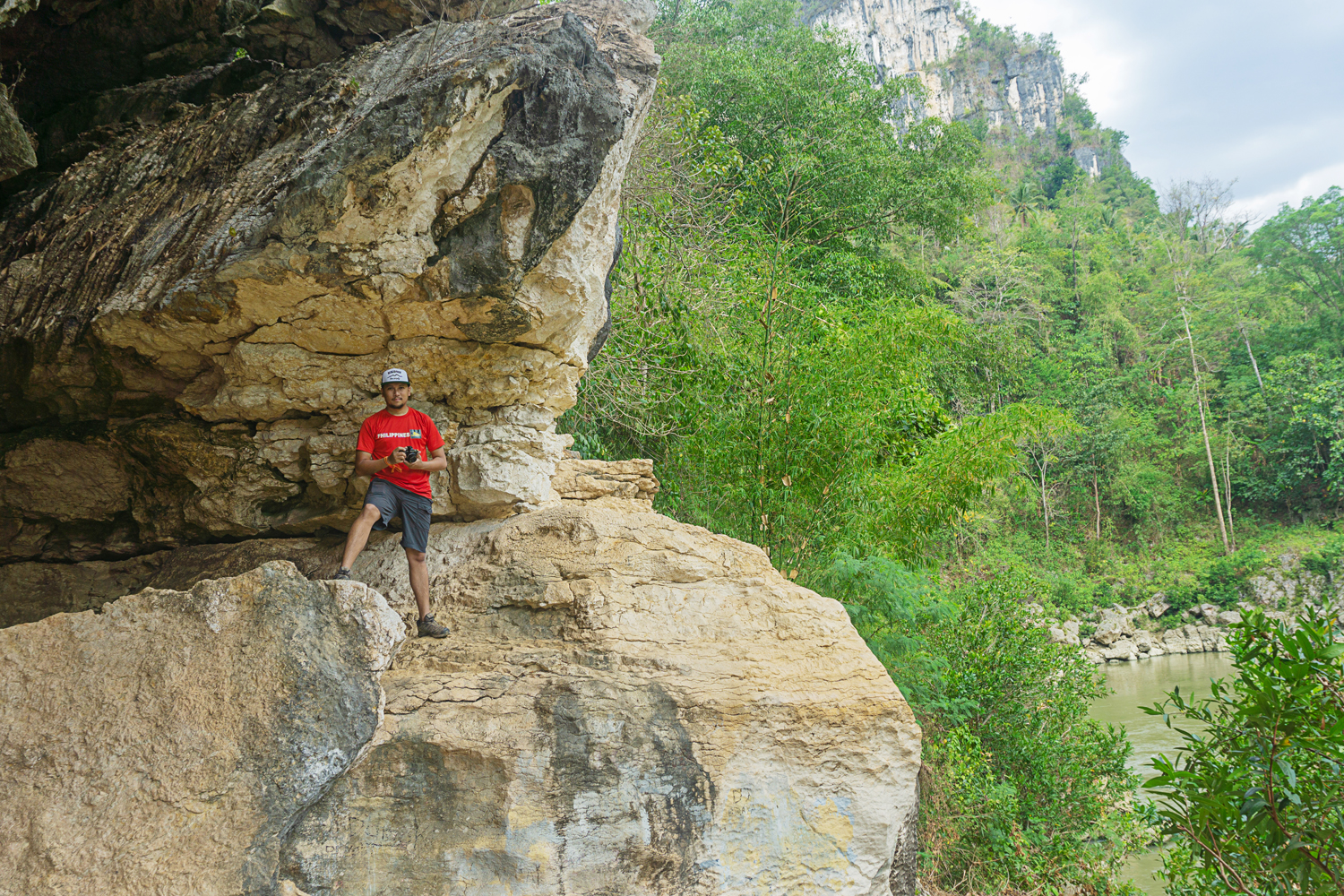 In 2018 I was awarded the 1st and 2nd in Wiki Loves Earth in the Philippines leg by the PhilWiki Community headed by Sir Irvin Parco and Ms. Maffeth Opiana. Sadly, my entries and the other 8 were not part of the international winners. However, Christmas came early this year as my photograph of the Blue Water Cave placed 6th in the international competition. It is indeed with great pride and joy to have represented my country in a photograph for the world to see. I am forever grateful to my Olympus camera (may you rest in peace) and the friends who have made this journey possible.

I am looking forward to 2020 with great purpose and an insatiable urge to purchase a higher model from the Olympus camera lineup. Perhaps an OMD EM 5 Mark II with a weather-sealed lens would do the trick, since my work deals most of the time with splashes, rain, and tropical weather. The weather sealing is a necessity to have your focus more on the moment rather than the welfare of your gear. I believe life has a funny way of proving other people wrong, sensor size may matter to some, but what matters most, in the end, is the image we create through our passion.

An experienced travel photographer and writer for the past 6 years. Closely connected and freelancing for the Department of Tourism. Is also an appointed tourism consultant by the Governor to the province of Misamis Oriental. Adept to photographing festivals, landscapes, portraits and products, Glenn’s work is published in newspapers, magazines, books and billboards.

An experienced travel photographer and writer for the past 6 years. Closely connected and freelancing for the Department of Tourism. Is also an appointed tourism consultant by the Governor to the province of Misamis Oriental. Adept to photographing festivals, landscapes, portraits and products, Glenn’s work is published in newspapers, magazines, books and billboards.

Posted on June 7, 2022June 6, 2022by Kevin Hugo
My name is Kevin Hugo and I live in a small town in the Wiltshire countryside in the UK. I started taking photographs when I was given my first camera as a child. This was a si…
END_OF_DOCUMENT_TOKEN_TO_BE_REPLACED
Categories INSPIRATION

Posted on May 24, 2022May 23, 2022by Enrico Simeon
Hi, my name is Enrico, I am 33 years old, and I live in a small town on the outskirts of Udine, in Friuli Venezia Giulia, in the northeast of Italy. I am a biologist, and I work a…
END_OF_DOCUMENT_TOKEN_TO_BE_REPLACED
Categories INSPIRATION

Posted on May 11, 2022May 11, 2022by Heinrich Lischka
I was born in Poland in 1968, and when I was 20 years old, I left for Germany. I have been working as a graphic designer for over 20 years. I live in Germany in Leipzig. In the 90…
END_OF_DOCUMENT_TOKEN_TO_BE_REPLACED
Categories INSPIRATION

Posted on May 5, 2022May 5, 2022by Axel Mols
I’m Axel, a 35 year-old amateur photographer and professional chef. I live in a small city in the south of the Netherlands, called Tilburg. In my spare time, I am a bit of a he…
END_OF_DOCUMENT_TOKEN_TO_BE_REPLACED