I have just arrived home from the Democratic Republic of Congo where I spent 6 months with Médecins sans Frontières, also known in other parts of the world as Doctors without Borders. We set up a project in the heart of Kasai, bordering Angola, on the west coast of Africa.

Kasai is also a traditional stronghold of the opposition and with the current instability in the country due to the President’s postponing of the election, the opposition rose and there was war.  A man made famine was created putting millions of people at risk of malnutrition, starvation and death. The most vulnerable groups were children and women and that became our target population to save.

I am not a professional photographer, I don’t do this for a living, I don’t ask money for my pictures and I am not trying to sell them. What I do is different.

My photography enables me to advocate for the people living there. The people with no voice. The neglected people.

In Kasai we had two intensive therapeutic nutritional units and over 20 ambulatory nutritional units spread out over the province. Both intensive units were 140 kilometers from each other so as to have a maximal reach. In order to get to that place, we needed between 5 and 36 hours, depending on the ever changing road conditions.

The road, well let’s call it like this, was a mud puddle all the way with river crossings on hazardous wooden bridges or, sometimes, without any bridge at all. Spread throughout the road were checkpoints full of corrupt and drunk militaries trying to get money from anyone. And that’s mostly when the micro four thirds system comes in handy.

Paired with a prime, I look like a casual aid-worker with a simple camera. Having a full frame and their gigantic lenses on the other hand would have brought skepticism. Is he a journalist? A spy? What does he want here?

Journalists and camera people in general have a difficult time to get access to rebel controlled locations and/or where the government has something to hide. In general they have a hard time getting to conflict places and if they do, it is because this armed group was willing to and they will take advantage of this so that you can shoot what they want you to show the world.

I don’t take pictures of military locations or armed men. I don’t want to put my organization in danger by doing so, but having a Pen-F with a prime doesn’t raise suspicions and I can enter all territories easily and take picture of what I want.

I remember one time I was in South Sudan in a rebel controlled area. I had gone out to the river with the E-M5 Mk II (before the Pen-F came out) and one of the locals that was working with us. Once we arrived at the river, I had asked him if it was safe to take pictures, to which he had replied «yes». So I did. I looked for the best spot and I started shooting. I did get this eagle flying over this magnificent sunrise watching over two people washing their clothes when suddenly a militia men came from behind with an AK-47.

He asked me why I was taking pictures in his language. I called my colleague and asked him to translate. I then showed the picture and my camera, telling him it is to show my family how beautiful his land was. He laughed and said «When there is no more fighting come back with your family, it will be even more beautiful.»

If you read this magazine you are considering micro four thirds. You have probably seen countless arguments on the weight and space savings, which to me are also one of the reason I didn’t go full frame. Why have a bigger, heavier camera when you can have similar image quality in a smaller package? I can tell you a story of a time I got the picture because it is so compact.

One morning, as I took my coffee and cracked a few jokes with my assistant, the Project coordinator came into my office and told me: «The army is marching here, you have 40 minutes to finalize things and pack your stuff, we are out!».

In that kind of situations, we have evacuation plans already in place so we exactly know what to handover and to whom. We must have 5kgs bags ready at all time so as to maximize the time spent for the handover of the activities. My bag was ready and my E-M5 MkII fit in my pocket, so it is 600 grams I am saving in my evacuation bag. We left the place with the LandCruiser leaving behind all the locals that were working with us. We were abandoning them and they were terrified. It was horrible.

Once arrived at the airstrip, an OCHA helicopter was waiting for us, my camera was in my pocket and I could take a picture showing the emergency of it all. Could I have done it with a full frame with better quality? Yeah sure. But would I have been able to take the camera out of my bag in the middle of it all? Would I have had the time to get it from my bag when I pictured the shot?

For my line of work, people usually bring compacts but I enjoy photography, I enjoy the technicality of it, the experimenting and I don’t just want to advocate. I want to advocate in a way that touches people and to do so I need to render a high quality picture taken at the right moment. And although I am far from achieving what I want to, the Olympus system is what can bring me closest to it.

I am now taking a break from work and focusing more on my projects. I have already realized a few travel movies with my Olympus that survived the salty air and the sand while sailing the coast of Zanzibar, the humidity while crossing India in a rickshaw and this time, it will have to survive a through hike of the Pacific Crest Trail, a 4,265 kms walk from Mexico to Canada. Would a full frame survive those conditions ? Maybe some of them. But would they be light enough ? Definitely not. 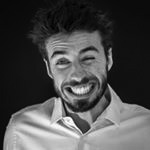 “I am a traveller, runner, hiker, walker, alpinist, photograph but most importantly I am a French Frie that indefinetly left his beautiful alpine country to discover the rest of the world and share it through the lens.I work for Doctors without Borders / Médecins sans Frontières, a wonderful organization full of selfless people. I have done a few ultras and I like to go to places that are difficult to access. I celebrate discomfort!
I do what I do until it no longer makes sense.”

"I am a traveller, runner, hiker, walker, alpinist, photograph but most importantly I am a French Frie that indefinetly left his beautiful alpine country to discover the rest of the world and share it through the lens.I work for Doctors without Borders / Médecins sans Frontières, a wonderful organization full of selfless people. I have done a few ultras and I like to go to places that are difficult to access. I celebrate discomfort! I do what I do until it no longer makes sense."

Posted on September 11, 2020September 11, 2020by Torjan Haaland
My interest in photography started early in my studies at the age of 22. The first camera I ever bought was the Canon EOS 450D. A great starting camera at that time, and the camer…
END_OF_DOCUMENT_TOKEN_TO_BE_REPLACED
Categories INSPIRATION

Posted on September 6, 2020September 3, 2020by Nick Wilson
My name is Nick Wilson, I am a 36-year-old husband, Father, and freelance photographer. I am lucky enough to call Mesa, Arizona my home. I have a very wide scope of work ranging f…
END_OF_DOCUMENT_TOKEN_TO_BE_REPLACED
Categories INSPIRATION

Posted on September 8, 2020September 3, 2020by Ilaria Gavazzi
My name is Ilaria Gavazzi, I'm 53 years old and I'm Italian. I'm a hospital nurse and work in a dialysis ward. I live in a small town in Tuscany and the countryside is very close …
END_OF_DOCUMENT_TOKEN_TO_BE_REPLACED
Categories INSPIRATION

Posted on September 4, 2020September 3, 2020by Dániel Molnár
I am not a professional but an enthusiastic fan of photos who loves visual arts. I live in the capital of Hungary, Budapest, and I work for an International insurance company. As …
END_OF_DOCUMENT_TOKEN_TO_BE_REPLACED